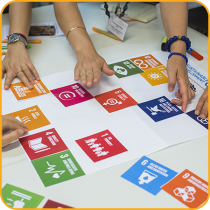 The urgency of many global challenges is putting more and more pressure on local governments. In fact, mayors and local decision-makers are increasingly faced with the consequences of what is happening outside of their borders.

One way to overcome this is to join forces globally and make a direct impact locally. This is why the 17 Global Goals that the UN and its 193 member states adopted constitute a powerful framework for collective action in areas such as climate change, affordable and clean energy or gender equality, just to name a few. The question is: what is truly needed to localise these so-called Sustainable Development Goals (SDGs)?

This question was at the forefront of the many discussions that took place during our event “UN Global Goals, Triggering a Wave of Actions in Europe and Beyond”, on 29 May 2017, in Brussels. It was coorganised by the Council of European Municipalities and Regions (CEMR) and PLATFORMA.

A change of mindset

A first point in answer to the question is to change our mindset. As the deputy secretary general of the global network of towns and regions (UCLG), Emilia Sáiz, puts it: “The Sustainable Development Goals (SDGs) are universal in nature and have a long-term scope. The local political processes, however, often focuses on day-to-day issues. This implies a change of mentality as local politicians are not used to universal goals. This also implies lots of awareness to be raised around these goals.”

Public communication should be considered to make local politicians but also citizens aware of the existence and the added value of the UN global goals. “There is no better ambassador to convince a mayor than another mayor”, CEMR vice-president, councillor of Bonn, Christiane Overmans, told the audience. She continued, saying that “we need ambassadors to open doors and put in the spotlight the advantages that can result from the implementation of these goals locally. Local politicians should not be solely considered as implementers, but also local facilitators and communicators.”

Localising the SDGs therefore confronts local governments with questions about their role, but also the institutional and financial frameworks within which they should act. As UNDP coordinator, Johannes Krassnitzer, explained: “With all the different local, national, European and global frameworks, there is always a risk that the SDGs are considered as another set of goals. Perhaps the most significant challenge lies in providing clear and shared frameworks for all spheres of governance. We need to come together and work in partnership.”

In turn, participants shared a general consensus that new types of partnerships should be forged to stimulate citizens, the civil society, the private sector and academia to contribute to the goals and learn from each other.

This brought PLATFORMA policy director, Wouter Boesman, to say that “learning between peers is one of the most efficient methods.” He launched the idea of peer reviews between local governments. “With this process, two mayors or local practitioners will be able to review, evaluate and improve each other’s plan and contributions towards the implementation of the Global Goals.”

In the afternoon, concrete examples from European cities and regions were presented during various learning workshops on monitoring and data collection, awareness raising or international cooperation.

Also worth noting was the handy toolbox that provide practical direction in assessing, planning, implementing and monitoring local policies, in accordance with the Global Goals.