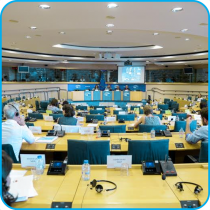 If everyone agrees that local governments are crucial to move towards gender equality, we believe they should receive appropriate funding to support their efforts. This is in substance what CEMR representatives*, Ibon Uribe and Heléne Fritzon, expressed at the European Parliament, during the meeting of its committee on women’s rights and gender equality (FEMM) on 20 June.

Insisting on the need for more support, Heléne Fritzon said: “Three months ago, the European Parliament voted a resolution acknowledging the need for financial support to initiatives that address gender equality at the local level. We rely on the European Union and the member states to create conditions that encourage local governments and their networks to work towards equality.”

Beyond financial support, Ibon Uribe raised awareness on the lack of sex-disaggregated data at the local level, in other words, data on individuals broken down by sex. “We seek the European Union’s support in collecting sex-disaggregated data at local and regional level. Having this data would help towns and regions immensely in defining, implementing and analysing their policies on the equality of women and men”, Ibon Uribe told the MEPs. He specified that “this data should be linked with the Gender Equality Index of the European Institute of Gender Equality, EIGE, and their database.”

“To achieve accurate and measurable results, to monitor progress on gender equality, and simply to avoid shooting in the dark; we hope the EU will support us and hear our call”, he added.

Closing his speech, Mr Uribe invited Members of the European Parliament to Bilbao, the host city of CEMR’s upcoming Conference on equality, diversity and inclusion from 11 to 13 June. “In our towns and regions, we believe our differences unite us. Come to Bilbao and feed the debates on how to build communities that value everyone, communities that unleash the full potential of their population.”

Organised around the three themes of equality, diversity and inclusion, this event will be vital to discuss how to develop attractive communities and enhance the well-being and quality of life of all citizens.

CEMR has historically been a pioneer on gender equality at local level. From organising the first conferences of local elected women in the 1980s to establishing the Charter on Equality of Women and Men in Local Life, which today counts over 1650 signatory cities in 34 European countries. Find out more on www.charter-equality.eu.