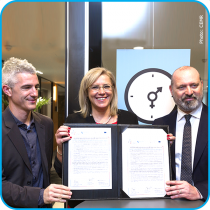 European Commissioner for Regional Policy, Corina Crețu, expressed her support for women's empowerment and to foster their active participation through the development of networks of locally elected women in Europe and beyond. This was announced at the occasion of CEMR’s event on International Women’s Day, on 8 March in Brussels.

This event was the opportunity for Commissioner Crețu to meet representatives of local government associations. High level participants included President of the Emilia-Romagna region and CEMR President, Stefano Bonaccini, and Mayor of Galdakao and President of the CEMR Standing Committee for Equality, Ibon Uribe.

Reacting to this announcement, Stefano Bonaccini declared: “As CEMR President, I am eager to join forces with Commissioner Crețu, to act in favour of political and economic empowerment and active participation of women, both in Europe and the world. We need to ensure that equality remains a non-negotiable democratic principle and that we are determined to step up our efforts to achieve gender equality.”

This commitment was reaffirmed in a joint statement on empowering women and fostering their active participation in public life, signed by both Commissioner Crețu and CEMR representatives.

This event was the right time for the Mayor of Galdakao, Ibon Uribe, to announce the CEMR conference on equality, inclusion and diversity in Bilbao in 2018. Commissioner Crețu has already expressed her interest to attend the event.

Launch of the European label for equal, inclusive and diverse cities

For many years, cities, municipalities and associations of local governments have been taking steps towards gender equality. This is the reason that led CEMR to launch a process to create a European label for equal, inclusive and diverse cities.

“Local governments that are outstanding in terms of gender equality will receive a label proving their commitment at the occasion of the Bilbao conference in 2018,” declared CEMR secretary general, Frédéric Vallier.

On the same topic, Ibon Uribe, added: “This label will boost the implementation of the Charter, for example, by requiring its implementation, and set the basis to develop and strengthen networks of municipalities and elected women.”

2017: moving from words to action on the global stage

The year 2017 is a turning point in moving from words to action on the global stage. It is the year of the implementation of the UN Sustainable Development Goals, including goal 5 on gender equality and women’s empowerment. To this end, towns and regions are essential as they spearhead women’s empowerment in public life.

In this regard, Mayor of Angossas (Cameroon) and representative of the Network of locally elected women of Africa (REFELA), Anne Marie Tsitsol, called on networks around the world to work together. She applauded the commitment made by the Commissioner to support networks of locally elected women in Europe but also around the world. Because it is only by working together that we will reach equality.

All photos taken at the occasion of the International Women's Day are available here: http://bit.ly/2mmnfGZ