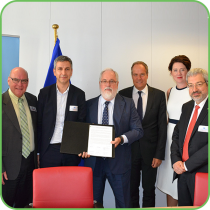 On June 20, the members of the European Covenant of Mayors Board met in Brussels to discuss the future strategies of the initiative, and the role of the Board itself, especially in view of the official launch of the Global Covenant of Mayors for Climate & Energy. Later in the morning, the European Commissioner for Energy and Climate Action Miguel Arias Cañete joined them to exchange views on the energy and climate policy. The mayors shared several proposals with the commissioner.

In this article, the Mayor of Udine and CEMR spokesperson on climate and energy, Furio Honsell, summarised the meeting's outcome. Mr Honsell is also member of the Covenant Board:

After a meeting of the European Covenant of Mayors Board, which is composed by Mayor of Heidelberg Eckart Würzner, Deputy Mayor of Växjö Asa Karlsson Björkmarker, President of the Province of Barcelona Mercè Conesa I Pagès, Mayor of Ghent Daniël Termont, Deputy Mayor of Paris Christophe Najdovski, and myself, we were joined by Commissioner Arias Cañete.

Commissioner Arias Cañete gave us an overview of the European Commission’s Mobility Package, one of the key elements of which is the deployment of electric-mobility solutions. The commissioner insisted on the need for less polluting cars, saying that a €500 million budget could be dedicated to this issue. Mr Arias Cañete also specified that local governments had a crucial part to play, notably in facilitating the deployment of charging stations. Finally, he outlined the need to define a European infrastructure plan for electric cars.

All Mayors actively reacted on these issues. Mayor of Heidelberg Eckart Würzner insisted on the fact that, according to him, mayors should focus on changing citizens’ behaviour by developing public transport and promoting active mobility (walking, cycling...). A statement that was widely shared by all of us. Asa Karlsson Björkmarker, from the Swedish town of Växjö, also stressed the importance of involving citizens in the reflection on urban mobility, addressing related issues such as air quality and urban space.

I expressed the view that e-cars are not THE ultimate solution for sustainable urban mobility and at city level, public transport as well as car-pooling and car-sharing should remain the main focus if we want to make our cities healthier. A more physically-active mobility is recommended also by all experts in urban health. We should empower local communities and make local responsibilities clear.

Deputy Mayor of Paris Christophe Najdovski gave interesting data. On the basis of a recent survey conducted in the Paris area, he explained that the average car occupation was 1.2 persons. He said that if they could reach 1.7 persons per car, there would be no more traffic congestion. The average speed is 15 km/h and the average distance covered in a day is less than 10km. Mr Najdovski concluded that in the Paris area, bicycles should be used whenever possible, also because they could be even more efficient than cars!

We also discussed the Clean Energy for All Europeans Package, energy renovation of buildings. In this regard I pointed out the need to take into account also health issues such as ventilation. We discussed the next multi-annual financial framework which should make it easier for cities to stimulate the energy transition and create low-emission areas. It was pointed out also that subsidising fossil fuel industries should be phased out. I stressed the importance of taking into account the economic and social impacts of decarbonisation in order to take on board the largest number of people in the energy transition process.

Finally, the Covenant of Mayors Board members handed out a declaration to Commissioner Arias Cañete, which outlined the achievements and role of the Covenant of Mayors movement. In this document, we re-affirm our commitments to the energy transition and climate protection and remind the essential role local governments play in the implementation of EU policies. In a nutshell, our message is that cities can do a lot because even if decisions may be difficult to make at local level, they are fast to be implemented.

With the support of all Board members, I suggested that the next Covenant of Mayors Ceremony be held in the first semester of 2018 to highlight the cooperation between cities and the European Commission. Commissioner Cañete expressed his full availability for the event. He concluded by thanking the Board for its suggestions and proposed to hold regular meetings with the Board.

* This article was originally published by the European Covenant of Mayors.