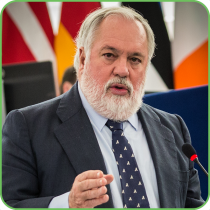 Commissioner Arias Cañete: "The energy sector is decisive for the implementation of the Paris Agreement"

Interview with European Commissioner for Energy and Climate Action Miguel Arias Cañete. This interview was originally published by the Covenant of Mayors for Climate & Energy.

The Covenant of Mayors has been increasing its global outreach for several years now, with the opening of Regional Offices all around the world. What inspiration do you think other Regional Covenants can draw from the Covenant experience in the EU?

Since its creation in 2008 the Covenant of Mayors has been one of the most successful European energy and climate initiatives, not least because it was supported by the Commission and directly linked to EU policy but mainly shaped by cities and for cities in a bottom-up process. Collectively EU Covenant of Mayors signatories are on track to meet their 27% average target for reduction in CO2 emissions by 2020. As I said before, the Covenant of Mayors is the world’s biggest urban energy and climate initiative and is a very powerful inspiration for municipalities worldwide.
The global outreach of the Covenant of Mayors started against this backdrop back in 2011 with the extension of the initiative to the EU Eastern Partnership countries [ndlr: Belarus, Ukraine, Moldova, Armenia, Georgia, Azerbaijan]. In 2012, the Covenant of Mayors was further extended to the European Neighbourhood South Region through the CES-MED project. The Regional Offices are therefore operating with the full support of the original Covenant. Their DNA is identical to the European Covenant and they share the same goals and values: thorough citizens’ and stakeholders’ engagement, local ownership and a result-oriented approach to improve the air quality and liveability of cities.

At COP21 in 2015 in Paris, we launched the Covenant of Mayors in Sub-Saharan Africa, and we now have already the first cities receiving support to reduce poverty while at the same time promoting energy access, resilience and a low-carbon economy! We are very proud of supporting similar initiatives throughout the globe, with the launch at the end of last year of regional Covenant processes in North America, Latin America and the Caribbean, Japan, China, Korea, South-East Asia, and India.

ll these networks will benefit from the extensive experience gained in the EU, including through pairing with cities in the EU as well as within the region. All the autonomous regional or national Covenants will operate under the umbrella of the Global Covenant of Mayors for Climate & Energy – which, as the largest global coalition of cities committed to fighting climate change, will support them in having a stronger voice in the international context, but also allow them to learn from each other and collectively progress.
Cities play a key role for the world to meet the goals set in the Paris Agreement. The EU Covenant of Mayors offers a framework for strategic, long-term action that is conceived and supported by local players. And it works!


You can read the full interview here.