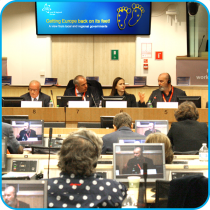 Finding common ground to get Europe back on its feet

From one town to another, the views on the future of Europe can greatly diverge. Now imagine the difference in views that can exist between over 130,000 European towns and regions.

You might think that finding common ground on the future of Europe from a local and regional perspective would be impossible. Think again. Today, the Council of European Municipalities and Regions (CEMR) hosted a fruitful debate with local, regional and European leaders on how to get Europe back on its feet. Taking place during the European Week of Regions and Cities, this debate attracted over two hundred participants.

It is certainly a disturbing fact that in today’s Europe for the first time, we have a new generation that is hit hard by unemployment. This generation has less hope than their parents. That was CEMR President (also president of AICCRE and Emilia-Romagna), Stefano Bonaccini, in the first part of the debate on a diverse Europe, closer to its citizens. These striking, perhaps frightening words reflect nonetheless a reality for many young Europeans, and, according to him, it will be much worse for them if cohesion policy is cut. Many young people are in a difficult situation and they are mostly pro-European: whether it’s cohesion policy or keeping open borders, Europe can’t let them down.

All people present joined Member of the European Parliament Eva Maydell on one point: The EU should work as a true citizens union. We need a bottom-up debate in which all have their own concrete ideas and scenarios. We need to have the debate outside of this room, with citizens in our regions. These words were echoed by Committee of the Regions Vice-President Luc Van den Brande who declared: Citizens should not just be followers of the European project, but true protagonists. To do so, we have to complement representative democracy with deliberative democracy.

Next, we opened the debate on an inclusive, innovative and sustainable Europe. MEP Jan Olbrycht stated we should not treat inclusion, innovation and sustainability as theoretical, but as concrete, in the now. From migrant integration to climate change, we do have many concrete problems, but also many concrete solutions. A strong cohesion policy and better involvement of citizens in decision-making answers some of our questions.

Finally, going beyond our continent’s borders, we discussed the role that Europe plays in the world. One big problem in Europe today is the recentralisation of power, claimed CEMR Co-President and President of CEMR’s Norwegian association (KS), Councillor of Telemark County Gunn Marit Helgesen. Despite this fact, she also insisted, along with CEMR Vice-President, Member of the Board of our Spanish association (FEMP), Mayor of Soria Carlos Martinez Minguez, that Europe and its local governments can and need to set an example for local autonomy and decentralised cooperation. Carlos Martinez Minguez also highlighted that international agendas such as the UN Sustainable Development Goals, Agenda 2030 or Habitat III, which define much of how the world should be organised, would not be possible without local governments’ involvement.

Strong local government helps prevent centralisation and nationalism. In the words of CEMR Co-President, Vice-president of our German section (RGRE), President of Ludwigsburg county Rainer Haas, Let us all have the courage to get Europe back on its feet. It’s up to us.

Photos of the event: http://bit.ly/2kH3j2B
CEMR’s position paper: What future for Europe? A vision from a local and regional perspective.

Subscribe to LOCAL INSIGHT, European affairs through a local and regional lens (available in EN and FR)