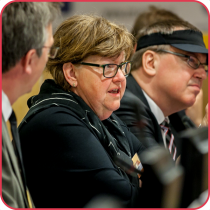 Interview: the mayor of Sala’s take on cohesion policy

What will happen to cohesion policy at the next EU budget review in 2020? Now that the discussions have been launched, we discussed with the mayor of Sala (SALAR, Sweden), CEMR spokesperson on cohesion policy, Carola Gunnarsson, about her expectations and demands for the future cohesion policy

Generally speaking, what type of projects are financed by the cohesion policy in Sweden?

In Sweden, we have developed projects to improve the competitiveness of SMEs in areas such as agriculture or the fisheries sector.

A key sector for us was helping students at risk of dropping out to stay in school. Unfortunately, students who leave secondary school education without a diploma risk exclusion from the labour market. With the support of the European Social Fund (ESF), we have implemented projects that combine a personal follow-up of students with actions targeting towns and schools. For instance, by opening new upper secondary schools. A total of 50 municipalities were involved in this project.

And in your municipality?

In recent years we paid a lot of attention to the exchange between students and teachers in European countries.  But today, two new funding areas are crucial in Sala: the integration of asylum seekers (Sweden had to relocate 4,469 asylum seekers, as agreed by EU member states) and providing competences for employees within the welfare sector.

As a mayor of a small town, what are the obstacles you face when applying for cohesion policy funding?

EU priorities rarely fit our needs, as too often, funds are uniformly earmarked at EU level. This is why I believe that towns and regions must be better involved in the next programming period. For instance, by making sure that the selection of priorities in the future cohesion policy is directly determined by the competent regional authorities together with the local level. This way, priorities can better respond to citizens’ needs.

Beyond that, there are too many layers of management at the moment in structural funds, too many overlaps, instruments and funds. Definetely, the administrative burden is far too heavy for all small towns.

What problems, if any, did you and local leaders in your city experience in absorbing cohesion funds?

The administration takes a lot of time and is very complex. I think it´s due to a lack of trust between the local level and the EU. Of course, improvements are possible, such as the simplification of the procedures. This is crucial for the future.

The debates on the future of Cohesion Policy have been launched. Why do you believe it should continue?

Cohesion policy is an instrument that demonstrates to the people that the EU cares about them. It could help us regain citizens’ credibility in the EU. It is also a tool that allows all levels of government to team up to tackle current challenges.

It is at the local level that the EU makes a difference to the individual citizen. It is therefore essential that all regions, more and less developed, within the EU and regardless of their size continue to be covered by cohesion policy, beyond 2020. Furthermore, it must come with an adequate budget to be able to respond to the tests Europe and its territories are confronted with: digitalisation, migration, employment or the circular economy.

What are your expectations for the next programming period?

I think the next cohesion policy should include more flexible rules to adapt the choice of investment to each territorial context.

What’s more, the investment priorities should be determined according to local and regional needs. For instance, in Sweden, towns and regions are confronted with migration. In that sense, the future cohesion policy should support us to integrate newly-arrived people into our society and create the best environment for them to find jobs.

The EU has endorsed several global agendas (Habitat III, Paris Climate Agreements) that highlight local governments’ role to address international challenges. How can the future cohesion policy help towns and regions to deliver on these commitments?

Towns and regions are definitely taking on a more important role in global politics.

What role can CEMR play in the discussions at European level?

I think CEMR plays a very important role in the discussion at the European level as a representative of the local level throughout Europe. Nobody else has so many contacts with local politicians all over Europe. The local level is the closest level to the citizens and I do hope the European institutions realize that it is very important to cooperate with CEMR if they would like to create a successful cohesion policy for the future.

How can the Cohesion Alliance contribute to these debates?

The Cohesion Alliance is an important network and a meeting place for those involved in the cohesion policy to make our voice stronger. It was officially launched in October, during the European Week of Regions and Cities, by the leading European associations of towns, cities and regions (including CEMR) and the European Committee of the Regions (CoR).

Through this alliance, mayors and regional leaders want to keep a strong cohesion policy that is able to respond to our citizens’ needs. From national, local governments to SMEs, NGOs, schools and universities, everyone interested in keeping the cohesion policy alive is invited to join this alliance, by signing the official declaration.

Read CEMR position on the future of Cohesion policy