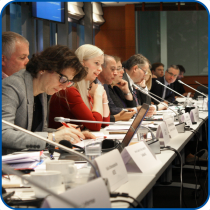 What CEMR's secretaries general meeting had in store

The microphones have been turned off. The chairs have been neatly stored away. The curtains have just closed on the secretaries general and directors meeting of CEMR’s member associations, which took place in Brussels from 6 to 7 November.

Organised in CEMR’s offices, this meeting was the time and place for representatives of our associations to go through CEMR’s latest political statutory and financial developments.

A first exchange between the secretaries general brought the debate on the issue of the urban agenda for the EU, which contributes to the implementation of the UN 2030 Agenda for Sustainable Development, notably Goal 11 on sustainable cities and communities.

Several honorable guests took part in the discussion : Aire Rihe, representative of the Estonian presidency of the EU, Judit Toroknr Rozsa, head of unit within DG REGIO at the European Commission, Thomas Wobben, director at the Comitteee of the Regions and Johannes Krassnitzer, ART programme coordinator at the United Nations Development Programme (UNDP).

Although all speakers agreed on the essential role played by local governments in the implementation of global and European agendas, some did highlight the need to involve cities in the monitoring of the progress achieved on the road to the Sustainable Development Goals.

In the evening, the secretaries general and directors paid a well-deserved tribute to two of their colleagues who are retiring: Betty De Wachter from our Flemish association (VVSG) and Walter Leitermann from CEMR’s German section (RGRE), for their brilliant career working for towns, regions and local government associations.

The next day, we had the pleasure of listening to the representative from the Council of Europe, Prisca Barthel, who presented the Europe Prize 2018. The opportunity was seized to invite cities and local governments to submit their application by 15 January 2018.

The rest of the meeting was focused on CEMR’s internal affairs. Among the matters at hand, we dealt with the report on the implementation of the 2017 work programme, the 2018 work programme proposal, the organisation of the Equality, Diversity and Inclusion conference in Bilbao, from 11 to 13 June 2018, the CEMR retreat in Soria, as well as an update on PLATFORMA’s activities.

The next meeting will take place in Bulgaria from 12 to 13 April 2018. The place is still to be determined.