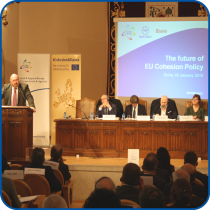 The members of CEMR’s Executive Bureau and Policy Committee gathered in Soria from 17 to 19 January 2018 to discuss the hot topics concerning Europe’s towns and regions, and to decide what action to take.

This gathering took place on the banks of the Douro river, in Soria, upon the invitation of its mayor, Carlos Martinez Minguez. The mayor is also CEMR Vice-President and Member of the Board of the Spanish Federation of Municipalities and Provinces (FEMP).

Let’s take a look at what was in store. If you want to read this wrap-up with pictures, you can find all the photos taken during the event on CEMR’s Flickr account.

2017 was a year of many highs and lows in Europe. Take a look at what CEMR went through last year in the video we produced.

Why the EU needs a local-friendly spending plan beyond 2020

In 2020, the EU will have a new seven-year spending plan. This plan should be fair to towns and regions and their financial needs: read the new position adopted by the Policy Committee on the Multiannual Financial Framework for more details.

The EU’s Cohesion policy, a source of major investment in Europe’s towns and regions, is in great danger of being cut after 2020. How do we protect it? What does the future hold? That’s what Policy Committee members debated. For more information, read our 14 ways to update and upgrade cohesion policy beyond 2020.

Our members in Soria had the exclusive opportunity of receiving a copy of our book, “Europe 2030: Local leaders speak out”, before its official launch. How do you see Europe in 2030? This book gathers answers to this ambitious question from local and regional leaders from all over Europe. Make some space in your library: “Europe 2030” will be available in all good bookstores on 31 January.

New faces will now be representing CEMR in two different fields. Congratulations to our new young elected representatives, Tautvydas Tamulevicius, Deputy Mayor of Alytus, from the association of local authorities in Lithuania (LSA), Koenraad De Ceuninck, President of the municipal council of Maldegem, and Hannes Anaf, councillor of Turnhout from our Flemish association VVSG. For the position of spokesperson and Vice-Chair of the Standing Committee for Equality, the Policy Committee members unanimously appointed Emil Broberg, Councillor of the region of Östergötland, and third Vice-President of SALAR.

We discussed the latest updates on our conference on Equality, Diversity and Inclusion in Bilbao and presented the programme. A more detailed programme will be available on the conference website at the end of January 2018. Register now and you will benefit from the early bird fee (available until 5 March).

Want a flavour of what the conference will be like? Watch the new video (in English or in Spanish) with a special message from the mayor of Bilbao, Juan Mari Aburto.

Book your tickets: the first ever CEMR retreat is set to take place in Brussels from 3 to 5 October 2018.

Our next Policy Committee will take place in Bilbao, during our conference on Equality, Diversity and Inclusion, upon the invitation of the mayor of Bilbao, Juan Mari Aburto.