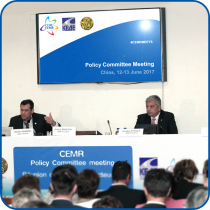 In a nutshell: the Chios Policy Committee’s main conclusions

The members of the Council of European Municipalities and Regions’ (CEMR) Policy Committee gathered in Chios on 12 and 13 June 2017. Among other topics, they discussed migration and refugees, adopted positions, namely on the future of Europe, on Climate and on the future of cohesion policy.

The Policy Committee was welcomed by the mayor of Chios, Manolis Vournous, and the president of CEMR’s Greek association (KEDE), Giorgos Patoulis.

Debate on migration and refugees

This debate was an opportunity to assess the state of affairs concerning migrant and refugee integration in terms of coordination between different levels of government. As the debates opened, the mayor of Chios, Manolis Vournous, shared a moving story on the hardships his city faces, being on the first line to manage refugees arriving from Turkey.

He stressed that money does not come from national authorities, but also the lack of information between different levels of local, national and European power, as well as the absence of a national coordinator in each island.

The Policy Committee adopted a position that lays out the local and regional vision in Europe for the years and decades to come. The document gives food for thought at an early stage of the on-going reflection process on Europe’s future.

The members of the Policy Committee unanimously adopted a declaration on climate. It comes as a reaction to President Donald Trump’s decision to withdraw from the Paris climate Agreement. An invitation was sent, via the declaration, to local and regional elected representatives so they work in close collaboration to continue their fight against climate change and reach our common goal of decarbonising our societies by 2050.

The Policy Committee offers 14 ways to update and upgrade cohesion policy for after 2020. One of the most important aspects that need to change is access to funding: the five current funds should be organised within one single regulation, which would avoid the current gaps and overlaps between them.

The president of CEMR’s basque association (EUDEL), mayor of Getxo, Imanol Landa Jáuregi, invited local and regional leaders from Europe and beyond to take part in CEMR next conference, in Bilbao, from 11 to 13 June 2018. At the heart of the debates will be questions around diversity, equality and inclusion in our towns and regions. This invitation was also made by the mayor of Bilbao, Juan Maria Aburto in a video message.

Among the other points on the meeting’s agenda was the adoption of positions on:

The meeting was also an opportunity to invite CEMR member associations to become active partners in PLATFORMA’s work, either as core-partner (by implementing PLATFORMA’s activities and possibly benefitting from financial support from the grant), or as associated partner (by taking part in activities without an allocated budget).

CEMR’s next Policy Committee will take place in the city of Soria (Spain), in January 2018, upon invitation of its mayor, Carlos Martínez Mínguez.