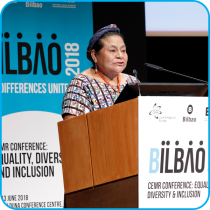 Over 500 local and regional elected representatives take the lead on Equality, Diversity and Inclusion in Europe

"It is a great opportunity to be here with you today for the CEMR conference", stated Nobel Peace Prize Laureate Rigoberta Menchú in her keynote speech upon the occasion of the CEMR conference on Equality, Diversity and Inclusion, from 11 to 13 June in Bilbao. Addressing the 500 local and regional elected representatives, Ms Menchú claimed: "You are the direct link with populations. You are the ones who can make equality, diversity and inclusion on the ground."

The conference programme, taking place over three days, will consist of 16 sessions and a hundred speakers (60% women) including representatives of cities, European institutions and international bodies such as UN Women, the European Institute for Gender Equality and the European Coalition of Cities Against Racism, among others.

The debates will tackle themes that are extremely relevant and of local interest, for instance, political participation of women, security in public spaces and social networks, the rights of the LGBT community, inclusion in the labour market, migrant integration and open government.

In his address, the Lehendakari (President of the Basque government), Iñigo Urkullu, stressed that “our model is sustainable human development and the values of equality, respect for diversity and social inclusion form part of our ideology. The individual is the central axis of actions from the public institutions and social justice is part of the ideology of the Basque people.”

For his part, the mayor of Bilbao, Juan Mari Aburto, summed up this conference as “a magnificent opportunity to debate and learn about equality, diversity and inclusion, elements whose importance is undoubtedly only going to increase, in the organisation and management of our societies, of course at state level, but above all at our level, the level of  municipalities and regions, which in this case, make up Europe. In Bilbao we are working hard to achieve this. Furthermore, this conference is also an enormous opportunity to continue to position ourselves internationally as the open, committed, cohesive and caring city we are and aspire to increasingly be”.

Imanol Landa, President of the Association of Basque Municipalities (EUDEL), and mayor of Getxo, underlined the value of the Conference as “the opportunity to renew our pact between European municipalities from a common vision and from the shared commitment towards continuing to innovate our public policies and services for the benefit of all people who make up our citizenry”. The president expressly addressed the representatives of local government, emphasising that “it is the moment to empower ourselves, through municipal associations; this is our strength. Let’s be an example of public commitment and excitement, to transmit to other young leaders who, in turn, inspire others that surround them.”

Stefano Bonaccini, President of the Council of European Municipalities and Regions (CEMR) and of Emilia-Romagna, stated: “Today, we face new realities concerning inequality, discrimination and social exclusion in people’s everyday lives. And yet, the vibrant energy for change shown by the local leaders and experts gathered at our conference prove that they can take impactful action on these fronts. This is also proven every day by more than 1,700 cities, towns and regions that have committed to achieving fairer societies through CEMR’s Charter for Equality of Women and Men. Furthermore, local and regional leaders around Europe have also committed to face the asylum crisis and make our towns and regions places in which everyone feels at home. Among them, more than 500 will be exchanging and learning from each other during our conference in Bilbao.”

Don't miss out on all the photos from the first and the second day (our photo albums are regularly updated). You can also join our lively debates on social media via the conference hashtag, #CEMRBilbao2018.