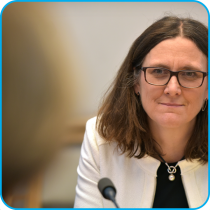 “The EU politics will be less of a men's club if women had chances to pursue politics on the national & local levels,” EU Commissioner for Trade claimed

Today, less than 20% of mayors and less that 30% of members of national parliaments in Europe are women.

With the European elections in 2019 around the corner, at CEMR we want to take this opportunity to reverse this trend. Through our campaign “Power2Her - European Elections 2019”, we will give visibility to women in politics and keep advocating for equal representation into positions of powers.

In the frame of this campaign our secretariat had a conversation with the European Commissioner for Trade, Cecilia Malmström, on women’s participation in politics.

Before becoming a Commissioner, you worked at local level. According to your experience, what are the main challenges that cities face to advance gender equality?

I think the challenges are very different in different cities and regions. Obviously, the lack of female representation in elected assemblies is in most cases a joint issue that many cities are struggling with.

However, the solutions to it may vary; it could be better education, healthcare or housing, as well as childcare in order for both men and women to work and have a family.

As a woman, did your local experience have a particular impact on your national and European career?

My years in local politics were useful as it gave a good base, founded on regular contacts with citizens. That experience was useful as I engaged further in national and European politics.

However, the way politics are conducted is similar on all levels. You need to create networks, groups of supporters, and ally yourself with constructive people – women as well as men – if you want to achieve something. That I learnt very early in my local political work.

Women remain underrepresented in decision-making positions at all levels. Why is it important to have more women in leading positions?

It is extremely important that all who occupy leading positions in societies – be they in the private sector, governmental institutions or civil society – represent an accurate cross-section of society. Decisions are simply better if there is a good balance between men and women.

How do you contribute to reverse this trend?

In my role as EU Commissioner for trade, I use every opportunity to point out the importance of gender equality for economic growth, and the opportunities that trade can provide for women. I have been engaged at the international level to try to promote gender sensitive policies in trade. We are giving specific attention to how trade can better benefit women. We know that there are specific obstacles affecting women in this field.

But we also know that when women are deeply engaged in trade, especially in developing countries, it has positive effects on things like education levels and the health of their families. In more general terms, better gender equality also brings higher employment levels and helps tackle the challenges posed by our aging societies in Europe.

According the Global Gender Gap Report 2018, political empowerment is one of the most challenging issues for gender equality. How can EU institutions contribute to close this gap?

Equality between men and women is one of the core principles of the EU and we need to explore ways how to improve it.

European politics will be less of a men's club if women have an opportunity to pursue politics also on the national and local levels, because that is where political participation begins. It is important to use existing EU instruments that promote gender equality, awareness-raising and training. Some parties might want to work with quotas or zipping on their party lists. The most important tool is probably engaging in supporting networks where other women can serve as role models, helping with advice and mentoring.

2018 was a crucial year for women. Let’s recall the Spanish women's strike or that, for the first time, women are in the majority in US Congress. What do you think 2019 will be like?

Let’s not forget the amendment of the abortion law in Ireland!

I hope that in 2019 we will see more policymaking that promotes and maintains gender equality. That includes promoting education, possibilities to own and run a business and measures that address inequalities in the labour market.

We must also stand up to those strong political forces who reject the progress we have made on gender equality, and those who openly present themselves as anti-feminists.

The European elections are around the corner. What do you expect to see next May?

European citizens will have an important choice to make in May and hopefully these elections will drive more people to the polls to express their priorities for the future of Europe.

This election is maybe more important than ever. We will have the Brits leaving us. The anti-European, anti-immigrant, anti-globalisation, and many times also anti-feminist forces are organising themselves.

This will be an election about what direction Europe should take in the coming years, but also about European values and whether we are able to stand up for democracy, tolerance, the rule of law, equality and so on. So, use your vote well!

Traduire
Publishing Storytelling interviews with women in power are one of the activities of the “Power2Her - European Elections 2019” CEMR campaign, which aims to:

As a part of this campaign, on 6th March 2019, CEMR will organise as well a “Power2Her” event, to present its study women’s representation in politics, at EU, national and local level and to organise a roundtable discussion on women in politics. Click here to register.