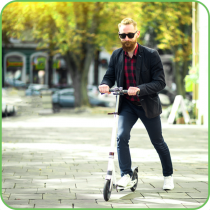 Will electric scooters be the new urban means of transport?

A new trend could invade European cities starting this summer. After having conquered several cities in the United States, electric scooters are about to discover France. The American start-up Lime will be rolling out hundreds of them in the streets of Paris from Friday, 22 June. Its goal? To occupy the niche of short-distance travels by proposing an alternative to walking.

In order to attract people, the device is simple and flexible. The rental of one of these two-wheel vehicles will need to go through a mobile app, which localises the scooters nearby. Their users will have to spend one euro, then fifteen cents per minute. Once the journey has been made, no need to look for a parking terminal. All you will have to do is leave your little racing vehicle (25kmph) on the pavement.

After self-service bicycles, chauffeur-driven vehicle services or electric car sharing, electric scooters could mark a new milestone in the evolution urban mobility. These electric scooters have appeared very quickly, and many municipalities did not anticipate them. In San Francisco, Lime and its two rivals, Bird and Spin, have been required to temporarily remove their scooters while their permit applications are being processed. They will have to respect a set of new laws to resume their activities.

However, this new device is somewhat reminiscent of the “floating bikes”, whose success has been limited so far. Also without parking terminals, they are struck by vandalism and theft. In Lille (France), last January, the Gobee.bike company has thus thrown in the towel, just a few months after having deployed its fleet of green bikes.

So, will electric scooters become a lasting and successful mode of urban transport in Europe? Only time will tell. But one thing is certain: “soft” mobility - the non-polluting kind - is constantly evolving.