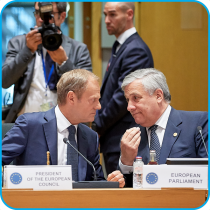 Following the European Summit of 28 – 29 June 2018, the Secretary General of the Council of European Municipalities and Regions (CEMR), Frédéric Vallier, states:

"Any new EU asylum agreement has to be in full compliance of international legislation. Moreover, any new asylum and migration policy should be discussed by all levels of government and not solely by EU member states. This is a challenge far too important not to involve those who are on the migration frontline, such as European cities, towns and regions.”

Despite this engagement: “Mayors and local leaders cannot be left alone to face the key challenge of social integration of migrants and asylum seekers. They need real support from all levels of political leadership, from national governments as well as from the European Union”, declares Mr Vallier.

“We, at the Council of European Municipalities and Regions, are ready to work with the EU institutions to define and outline the support that should be provided to towns and regions, to host and integrate migrants and asylum seekers. We have the ambition to improve the access to EU funding by towns and regions, both directly and indirectly, as well as to enhance solidarity between member states and at all levels of governance.