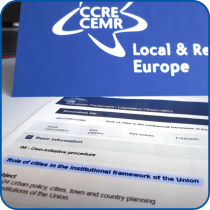 MEPs have made it clear: cities have a crucial role to play in EU policy-making

This is a great victory for local government and their associations. Today, members of the European Parliament voted in favour of a resolution on the “Role of cities in the institutional framework of the Union”. It aims to establish a legal basis to allow cities and their representative associations to be formally and systematically involved in EU decision-making.

Reacting to the result of the vote, CEMR President Stefano Bonaccini, declares: “For the Council of European Municipalities and Regions (CEMR), there is no alternative to the governance-in-partnership model ensuring that all local and regional governments and their representative organisation are instrumental in the development, implementation, monitoring and evaluation of policies and legislation.

Today members of the European Parliament voted in favour a resolution in plenary. This resolution includes the request for CEMR to be permanently involved in the design of EU policy making, by way of a structured dialogue, where local and regional interests are concerned. This marks noteworthy step towards the role of national associations in the institutional framework of the Union.”
While the European Parliament ruled in favour of local government and their associations, here is why we believe local government associations, such as the Council of European Municipalities and Regions, must be fully recognised as contributors to European Governance.

Local government associations have three solid arguments in favour of having a formal role in the institutional framework of the Union: they provide proximity, pre-legislative input and expertise.
By their very nature, mayors and local councillors are in a unique position to understand citizens’ needs and make EU legislation rooted in reality. But on their own, mayors or councillors are limited in their efforts to provide Europe-wide expertise and presence, crucial to effective policy-making. Only local government associations, with strong connections to day-to-day issues, can do this. They are the best placed to provide valuable and targeted input throughout the legislative process, but also in the pre-legislative stage when policy options are still being defined. This technical insight and advice is based on the knowledge of local leaders, practitioners and experts who are confronted with the reality on the ground.

Back in 2001, the Commission, in its White Paper on Governance, expressed the need for more systematic dialogue with representatives of local and regional government through their national and European associations at an early stage in policy making.

15 years later, some of the White Paper’s hopes became a reality with the arrival of the EU Urban Agenda, which led to the creation of 12 partnerships.

This model of governance in partnership is the way to go. It allows member states, the Commission, the Parliament, and local governments, on an equal basis, to review existing legislation and shape future policies.

But the story doesn’t end there. It is now up to the Commission and the Council to demonstrate how the concrete proposals that emerge from the EU Urban Agenda Partnerships can be taken on board in future legislative proposals.

In a Europe facing much division, member states and the European institutions must deepen their roots in local communities. And who else than local government and their associations to constitute the necessary link to Europeans. Let’s hope that the Commission and the Council will take into account the Parliament's resolution and recognise that this way of policy-making is a game-changer.