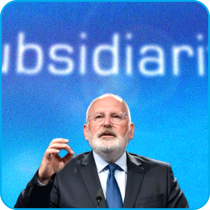 Exclusive interview with Commissioner Timmermans | The state of subsidiarity, today and tomorrow

Improving the way that subsidiarity is applied in the EU is a Commission's key priority towards more effective policy making by the EU Institutions. To bring this idea forward, in 2017, the European Commission created a Task Force on Subsidiarity and proportionality.

CEMR discussed with Commissioner and First-Vice-President Frans Timmermans to get an insight on the current state of play and future steps in subsidiarity.

During his last speech (SOTEU), President Juncker did not mention the conclusions of the work done by the taskforce on subsidiarity. Yet a year ago the creation of the task force had a prominent place in the last work programme of the Commission. Does the achievement of subsidiarity and improved EU governance remain a priority for the Commission?

Yes, the conclusions of the Task Force are presented in detail in the brochure that accompanied President Juncker's State of the Union speech. Subsidiarity, proportionality and improved EU governance remain key priorities for the Commission. They are core principles of the Commission's better regulation agenda and are as such embedded in our internal processes to prepare new policy initiatives.

The Commission will continue to advance its Better Regulation agenda, constantly evolving this approach according to new insights and lessons learned. To this end, a stocktaking exercise has been launched with regard to Better Regulation, which includes subsidiarity, to establish the achievements and see where we can do better.

The task force has recently published a set of recommendations to give a stronger voice to local and regional governments in EU policymaking. Could you tell us more about that?

The Task Force recognised that local and regional governments are at the sharp end of delivering the Union's polices on the ground. There are 74 regional legislative assemblies, around 280 regions and 80,000 local governments. However, these do not engage as much as we would like, despite the Commission having put in place tools to facilitate their engagement.

A stronger voice for towns, cities and regions will allow us to respect better the principle of subsidiarity but also to learn from their experience and help us to design better legislation that respects better their role in implementing Union legislation.

How can the Commission take forward these recommendations?

As indicated earlier, several of the actions proposed by the Task Force relate to the Commission's existing policy and practices on better regulation. The European Commission is currently taking stock of how its better regulation policy is working. We are considering how best to articulate this stocktaking exercise with the Task Force's recommendations. We plan to report in the first half of 2019.

It is clear that efforts will have to be made by all the institutions and local and regional bodies involved in policymaking if the Task Force's recommendations are to have effect. This means that we need to look at how the institutions work together, for example, in the framework of the interinstitutional agreement on better law-making. Each institution will have to look at its own processes and practices with a view to improving these, for instance as concerns subsidiarity.

What are the next steps planned for the taskforce?

In November 2018, the Austrian Presidency of the EU will organise a conference to discuss subsidiarity, proportionality and how to put in place the task force’s recommendations. What are your hopes for the outcomes of this conference?

I look forward to the conference that the Austrian Presidency is organising in Bregenz. It will be a good opportunity to discuss the Task Force's work together with representatives from other institutions, bodies, national Parliaments and local and regional governments.

The new way of working advocated by the Task Force will require changes from all of the institutions and bodies and will clearly take some time to implement. I hope therefore that the Conference in Bregenz will kick-start a process of change that ultimately will result in the EU being closer to its citizens.

CEMR is confident that the work of this taskforce will contribute to shaping the future of Europe and its governance. How can you work with your Commissioner colleagues from here until the end of this current mandate to help bring about a more structured and systematic means of involving local and regional governments more in EU policy-making?

The Commission is considering how it could consult more effectively with local and regional governments on evaluations and new initiatives. This may include improving our questionnaires and our outreach.

We are also looking at how we can improve our assessments of subsidiarity and proportionality and how to communicate these better to the co-legislators and the national Parliaments. We will also look at how we can review our existing legislation to look more closely at subsidiarity, legislative density, proportionality, and the role of local and regional governments, in a way which builds on the already impressive results of the Regulatory Fitness and performance (REFIT) programme and the REFIT Platform.