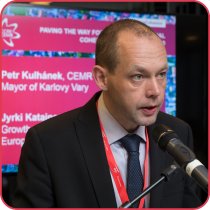 We are entering the final phase of the discussions on the future of Cohesion Policy. On the menu: budget cuts, investment priorities and conditionality.

The mayor of Karlovy Vary (CZ) and CEMR vice-president, Mr Petr Kulhánek, speaks about his concerns and expectations regarding the next programming period.

We are entering the final phase of the discussions on the future of cohesion policy. As a mayor, what are your top three expectations for the future?
I hope our call for simplification will be heard at EU level.
We can already see some positive steps in the Commission’s proposal to achieve simplification and we are happy about this progress. But let’s hope that they will be finally implemented. Simplified cost options, reducing red tape and less audit controls: to us these are the most important steps to reduce administrative burden in cities and towns in the Czech Republic.
We also expect the continuity of territorial development tools that allow Member States to combine funds when implementing projects on the ground (Integrated Territorial Investments - ITIs) and those that involve local communities in the implementation of projects (Community-Led Local Development - CLLD). We see these tools as the right way for the strategic development of cities and regions.
This is why, we are happy that 6% of European Regional Development Fund (ERDF) will be allocated to sustainable urban development. However, we would hope for even more allocation for urban development, including from other funds than ERDF, since the ERDF allocation for the Czech Republic is reduced by about one fourth.
In your opinion, what is missing in the current discussions?
Ahead of the next Multiannual financial framework (MFF), our association has conducted a study to analyse the needs of the Czech Republic’s towns and municipalities. The study identified problems in the implementation of EU thematic priorities in all types of municipalities.
Besides, we were surprised that ageing and depopulation were not included in the Commission’s priorities. This is why, I am not sure EU funds and their proposed priorities are going to help towns and municipalities with these issues, that, in my opinion are not only present in my country, but in Europe in general. This is why, I would strongly advocate to taking these priorities into account.
Besides, I believe that there is a disconnect between the Directorate-General for Regional and Urban Policy (DG REGIO) and the Directorate General for Agriculture and rural development (DG AGRI), specifically regarding rural development.
By putting away the European Agricultural Fund for Rural Development (EAFRD) from the set of rules defining the access to cohesion funds (CPR), the Commission is making it difficult to use these two funds together in an integrated way, as we could do so far with CLLD and also for the urban-rural links in the ITI strategies.
The European Commission proposes to cut cohesion policy’s budget by 7%. How could this affect your municipality?
Cuts in cohesion policy’s budget will increase the competition between municipalities when applying for EU funds, since the number of towns seeking for funds remains the same, while the budget will decrease. This is particularly problematic for the Czech Republic, as the Commission proposes to cut almost 25 % of EU funds we receive.
Here we have the risk to waste investments and time to prepare projects, which in the end won’t be funded. Besides, the money that local and regional governments invest to prepare projects will not be spent so effectively due to this increasing competition.
Of course, the amount of EU funding is crucial but is not the only matter. We believe that it is necessary to allocate this budget to activities really needed by municipalities and their citizens. It is very important to open up the range of possibilities to select the activities that are truly relevant for local needs and develop potential ones, which create synergies and additional effects in the area.
Finally, budget cuts will be followed by an increased co-financing rate of beneficiaries. There is a risk that this will lead to a narrower selection of the projects by municipalities, and this, even before the submission of projects. Therefore, internal prioritisation of which fund to apply to will have to be stricter for cities and regions.
What do you think of the possibility to introduce the conditionality principle in the future cohesion policy?
If the question is about ex-ante conditionalities as they are in recent MFF, I am aware of only one new conditionality – the one linked to the rule of law. There is also a strong focus on the “European added value” as a sort of conditionality for the next EU’s next long-term budget MFF.
In both cases, I believe that integrated tools, such as ITI and CLLD, are positive examples of fulfilling the need to consider the reality on the ground and to involve citizens on the effective use of EU funds. These approaches are very much in line with the mentioned conditionalities introduced in the MFF.
The European institutions aim at achieving an agreement on the full cohesion policy package in April. What could be the consequences if they do not reach an agreement before the European elections in May 2019?
It will obviously delay the start of the EU’s next long-term budget, which could have the same impacts as we are witnessing in the current MFF.

Right now, we are coming close to the 2018 milestone, whereas 2017 was actually the first year for the cities to apply for funding under the integrated tools, while they should have been already approved in 2017. So, it’s obvious that the managing authorities are having troubles to fulfil all the obligatory milestones by the end of 2018, which would secure additional funding (performance reserve) for the Czech Republic.
If the implementation period of the projects is reduced to two years after approval, as compared to three years currently, it would be even less possible for towns, cities and Member states to effectively spend the whole allocation they will be provided with.