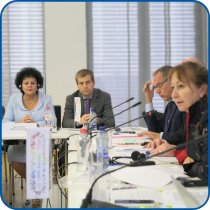 Wrap-up | CEMR Executive Bureau as if you were there

Autumn has just begun, and so has the first edition of the CEMR retreat with the meeting of our Executive Bureau in Brussels on 26 September. CEMR President Stefano Bonaccini had the honour of receiving the Executive Bureau in the representation office of the region he presides: Emilia Romagna.

Here’s a wrap up of the interesting debates, discussions and decisions that took place.

Europe for Citizens to be replaced by Rights and Values programme

The Commission is launching a new “Rights and Values” programme, replacing the Europe for Citizens programme. The person in charge of that programme, Director of strategy and general affairs Marta Cygan, discussed it with the Bureau. In her words, “it aims to protect and promote rights and values as enshrined in the EU treaties. It will promote citizen engagement and awareness of EU history and culture.”

Participants namely discussed how small towns and villages could access the programme, as well as the conservation of equality as a programme priority. The Bureau members were delighted about the launch of this new programme, which, as CEMR Vice-President and Mayor of Karlovy Vary, Petr Kulhánek pointed out: “is an excellent tool to overcome the distance between young people.”

A local and regional manifesto for the EU elections

CEMR is not a candidate for the upcoming EU elections, but it will have its own manifesto. This document will be addressed to all MEPs, to inform them about local and regional needs and their links with the EU. The manifesto’s shape and content were both thoroughly discussed, and it will be finalised as election day gets nearer.

Climate change, the air we breathe and the vehicles we drive are inextricably linked. That’s why we have decided to give our input to the Commission’s clean vehicles directive. As CEMR Executive Director for European Affairs, Angelika Poth-Mögele stated, “It’s important to take a long-term perspective. The whole life cycle of a car should be taken into account if we want to be in line with our 2030 climate goals.” All members of the Bureau support this idea, so CEMR’s key messages on this issue were unanimously approved.

Task Force on subsidiarity: discussing the role of local governments in the EU

As you may know, President Juncker launched a Task Force on subsidiarity and proportionality to find new ways to better involve local governments in EU policy and decision making. We discussed the Task Force’s report (there’s also a video). The main point of the discussions? The role of national associations of local government, as well as other players, in the assessment of the impact of EU law at local level. In this context, CEMR and its member association is preparing its position on this issue.

Apply for the Emperor Maximilian prize

Have you heard of the Emperor Maximilian prize for services to Europe at local and regional level? While it aimed at rewarding outstanding individual achievements, the award is now targeted at projects and initiatives that employ a cooperative, creative and sustainable approach to service to the central goals of the process of European unification. Christine Oppitz-Plörer, 1st Vice-Mayor of Innsbruck, invited all local and regional friends of Europe in the room to promote the prize. Applications are open until 15 November 2018.

You can find all the photos of this event in our Flickr album, and read the conversations that took place on twitter with the hashtag #CEMRmeets.