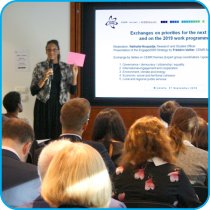 CEMR's first retreat: a time to listen, debate and exchange

“We must abolish the monopoly of states on EU integration.” This somewhat provocative statement was made by Oxford Professor of European Politics Jan Zielonka, during a debate intended to set the scene for participants attending CEMR's first retreat, on 26 September 2018, in Brussels.

“In the EU, towns and regions can be consulted", he noted, "but they don’t have access to decision making and resources. So maybe that is something to discuss.” These words sample the thoughts laid out in his book “Counter-Revolution: Liberal Europe in Retreat”, aiming at stimulating the discussions on the future of Europe.

The second speakers was Arnaud Magnier, the Secretary General for citizens’ consultation on Europe, at the French Ministry for European and Foreign Affairs. In his own words, “citizens expect local governments to express their voice at EU level. For many citizens, the local level is more relevant than the national level.”

People also seem to express concerns about globalisation, he told the audience before adding: "They call for a European Union which offers them effective protection from the negative repercussions of globalisation". The outcome of the consultations will be carefully scrutinised by the European Council meeting in December 2018.

In light of such analyses, the following question came up: what should be the priorities of towns and regions, and their associations for the future? The CEMR retreat, the first of its kind, was a tool to answer this question. In order to get the most correct and complete answer, and to draw inspiration, the local and regional leaders and experts of Europe’s national associations of local government sat down to discuss this in depth, and to include external partners in the discussion.

We exchanged with EU institution representatives, with international organisations such as the OECD and Transparency International, as well as with partners such as EPSU or ICLEI. We then lined up and exchanged on a series of priorities, including: the future of cohesion policy, the "localisation" of the Sustainable Development Goals, as well as the digital transition.

Preparing the future: from visions to details

Over the course of the second day, the different discussions were punctuated by thematic round table exchanges to help co-create CEMR’s work programme for 2019. We first focused on European challenges, such as EU citizenship, Brexit, cohesion policy, innovation and digitalisation; and then global challenges, such as climate change, cooperation, migration, and the Sustainable Development Goals (SDGs).

The CEMR retreat therefore truly encapsulated the spirit of our two main pillars: to influence European policy and legislation in all areas impacting municipalities and regions, and to provide a forum for debate between local and regional governments via their national representative associations.

It was also an opportunity to present the different projects that CEMR is involved in: the Local and Regional Dialogues on Cohesion Policy, the Covenant of Mayors in Europe and in Sub-Saharan Africa (CoM SSA), the Reference Framework for Sustainable Cities (RFSC), Localising the European Semester, and the PLATFORMA strategic partnership.

Last but not least, the retreat was also an opportunity for CEMR Secretary General, Frédéric Vallier, to present our ENGAGE! strategy. This strategy is also instrumental for our outlook on the future: it lays out the secretariat’s internal goals on how to best stand up for Europe’s local and regional governments.

You can find all the photos taken during the retreat on CEMR’s Flickr account. To have a read of all the discussions that took place on social media, have a look at the hashtag #CEMRmeets.