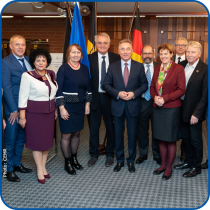 #CEMRmeets in Ludwigsburg: the highlights

In a continent that is changing at a fast pace, how can Europe’s local and regional governments best defend their citizens’ interests? CEMR’s Policy Committee members gathered in Ludwigsburg, Germany, from 10 to 11 December to discuss and take decisions on the hot topics affecting Europe’s towns and regions.

This event took place upon the invitation of CEMR Co-President, Vice-President of CEMR’s German section (RGRE), President of Ludwigsburg County, Rainer Haas. Have a look at the main highlights below, and don’t forget to check out the pictures taken during the event in CEMR’s Flickr album.

From subsidiarity to sustainability, 2018 was a year of many challenges for Europe's towns and regions. Sit back and watch our video for an overview of how we joined forces for our citizens’ benefit.

The Policy Committee took place in the home county of EU Parliament Vice-President Rainer Wieland, and we had the opportunity engaging in a debate with him. CEMR Secretary general, Frédéric Vallier, invited him to work more closely with local governments across Europe. Mr Wieland delivered a message of hope, despite the difficulties that Europe is facing, and also added that “we need more twinning!”

See the photos of the debate here.

From climate, to employment, to gender equality, the UN’s Sustainable Development Goals (SDGs) affect many areas of local life. How do we deal with this in terms of public policy? A very constructive debate took place on this issue, after which CEMR members committed to contribute to achieving the Sustainable Development Goals. We also had the opportunity to view our Flemish association VVSG’s great video on what the SDGs mean for local governments.

What strategy should Europe’s local governments undertake in order to deal with climate change? More specifically, how do we achieve the Paris agreement’s climate objectives? After a constructive debate on the matter, CEMR members renewed their commitment to contribute to the goals of the Paris Agreement. A sustainable future is only possible by working together with towns and regions!

Our Manifesto for the 2019 EU elections

For an election to work, people need to vote. The European Parliament’s Alexander Kleinig gave us a very interesting talk on voter participation in the EU, and invited all towns and regions to spread the word to vote. More information on www.thistimeimevoting.eu.

CEMR Vice-President and Roeselare councillor (Belgium), Luc Martens, has demonstrated a strong commitment to Europe’s local and regional governments throughout his career. As he approaches a well-deserved retirement, he was awarded the CEMR medal to thank him for his exemplary and loyal service over the years. Congratulations!

Let’s go to the Innsbruck Congress in 2020

We are all invited to CEMR’s next congress in Innsbruck (Austria), from 6 to 8 May 2020, by the Mayor of Innsbruck, Georg Willi, and the Deputy Mayor, Christine Oppitz-Plörer.

We also received the invitation from AFCCRE, CEMR’s French section, to join the Policy Committee in Orléans, France, in January 2020.

Translate
Did you know? In order to guarantee a gender balance in its decision-making bodies, CEMR put in place a quota system: 40% of its members must be women.  Today, 46% of our Policy Committee members are women.

Find out more about the Policy Committee and other CEMR events: join the conversations on #CEMRmeets.