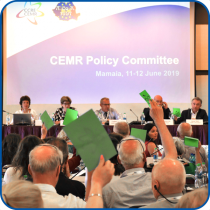 "We call on the EU to significantly strengthen local and regional governments' role in shaping future EU policies." This is the gist of what CEMR Policy Committee members voiced in a debate on the European elections' results. The debate was organised in Mamaia, on 11 and 12 June 2019, as part of CEMR's Policy Committee meeting.

CEMR members also expressed their readiness to be a strategic partner of the European Parliament, as stated in the Parliament's resolution from July 2018, in particular on issues that have an impact on our territories. They voiced their eagerness to a fruitful cooperation for the next five years for the benefit of Europe’s citizens.

The first day of the meeting was also devoted to an exchange between participants on the 30 year anniversary of the fall of the Iron Curtain. Speakers included the President of the Committee of the Regions, Karl-Heinz Lambertz, the mayor of Utrecht, Jan Van Zanen, CEMR Vice-President, mayor of Cumpăna, Mariana Gâju, as well as Dharmendra Kanani, representing Friends of Europe.

On the next day, discussions focused on CEMR's new study "Local and Regional Government associations", available in English and French, and CEMR's upcoming congress in Innsbruck, from 6 to 8 May 2020.

Finally, CEMR Policy Committtee members unanimously adopted two position papers, one on the European Commission's Communication on subsidiarity and proportionality, the other on the revision of the water framework directive.

CEMR Policy Committee meeting  was held under the auspices of the First Vice-President of the Association of communes of Romania (ACOR), Mariana Gâju, and her team. The next meeting will take place in Orléans, on 23 and 24 January 2020.

Also have a look at the photos taken in Mamaia.