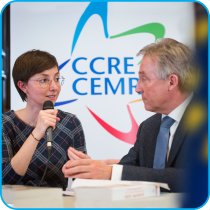 ”The EU needs to take a local shift”. This is in substance what European local and regional leaders voiced yesterday during a debate with prominent MEP candidates from different political groups.

The event was hosted by the City of Brussels, upon the invitation of the Council of European Municipalities and Regions (CEMR).

Following the presentation of the CEMR Manifesto for the European Parliament elections due in May, the discussion turned to four core themes that are fundamental for local government.

If the next cohesion policy budget is lower than the current one, European towns and regions could be forced into a state of underfunding for issues as essential as infrastructure, climate action and migration. “No one should be left behind. No regions, no places should be left behind. That’s why cohesion policy is important,” claimed Lord Mayor of Sala, CEMR spokesperson on cohesion, Carola Gunnarsson.

Sustainable Development Goals: the EU should team up with cities and regions

Europe’s towns and regions call for the SDGs to become the guiding principles that Europe needs to set up its future common strategy. This could be possible through an integrated approach to the SDGs within the EU, as explained by MEP (S&D Group) Maria Arena. “We have to fight for the fact that SDGs should be related to all the European Parliament’s committees. Having an intergroup on SDGs could also be a game changer.”

In the 21st century, the necessity of the SDGs should be obvious. Mayor of Soria, CEMR and UCLG Vice-President, Carlos Martínez Mínguez, expressed the reason for this in very clear terms: “It is important to move from a purely economic model of development to a human model of development.”

CEMR Secretary General, Frédéric Vallier, took the opportunity to invite everyone to come to the CEMR Congress on SDGs, in Innsbruck, Austria, from 6 to 8 May 2020. He said: “CEMR wants the SDGs to become the guiding principles for the EU. The SDGs should steer the EU towards a new model of development.”

Just last month, in Brussels, towns, cities and regions marched along with young people from around the world in the Global Climate Strike.

When asked about the significance of the youth climate movement, MEP candidate (Greens/EFA), Saskia Bricmont, said: “The younger generations probably understand something the older generations do not. I think there is unfortunately still a strong lack of political action and reaction. That could lead to a rejection of politics in the young generation.”

On the need for partnerships and cooperation on climate and energy issues, she added: “The regional level is where we can build strong partnerships with policies in rural development, agriculture, and health. In my region, Wallonie Picarde, I work with the European Covenant of Mayors for climate and energy.”

Governance and participation of local governments in the European project

“There is no real democracy without a strong local democracy. Democracy is not about vertical power, it’s about horizontal power.” That’s how municipal councillor of Uccle, President of Brulocalis, Marc Cools, set the scene of the discussion on governance and participation of local governments in the European project.

“What strikes me is the talking of the EU in the third person. The EU doesn’t function in the third person. It’s a collective, whether you’re from the local, regional or national government. The EU level, and local and regional, are not separate”, pointed out EPP Vice-President and Campaign Director for the European elections, Dara Murphy.

On the important role played by associations of local and regional governments, MEP, President of the Urban Intergroup of the European Parliament, Jan Olbrycht said: “We cannot expect from all mayors that they will be active at EU level. That’s why we have the associations. We need day by day contact, mayors cannot do that. CEMR does.”

To inspire the different speakers, President of Ludwigsburg County, CEMR Co-President, Rainer Haas, invited everyone to read “Europe 2030 – local leaders speak out”, which they received as a gift. He added: “It’s up to us to cooperate in a more intensive way. Only if we cooperate, can we move forward.”

On camera, towns and regions call on the EU to take a local shift

Learn why Europe needs a local shift directly from those who experience the need for it on a daily basis: Europe’s local and regional leaders. Get comfortable in your chair and watch their video message.

The "Manifesto for a local and regional Europe" is available in: Also worth reading, Euractiv article on the event.