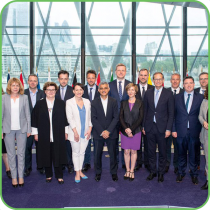 “We are calling on national governments and EU institutions to act with greater speed in tackling the climate emergency.” This is in substance what the mayors of the 28 EU capital cities - home to 40 million people - expressed in a joint declaration adopted in London, on 25 June 2019.

“Our governments and institutions must commit to long-term climate targets aligned with the 1.5C aspiration of the Paris Agreement”, the declaration reads while making clear: “these should include the objective of peaking emissions by 2020, more than halving emissions by 2030 and reaching net-zero by 2050.”.

The mayors also highlight that European cities are especially keen on improving air quality but need more support to do so. It also outlines that “the EU Urban Agenda should be included in the Commission’s annual work programme” and calls on the European Parliament “to maintain the Urban Intergroup”.

CEMR was represented by its Secretary General, Frédéric Vallier.