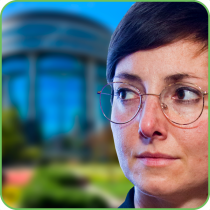 MEP Saskia Bricmont: "In the future, EU policies must be climate proof"

Newly elected Member of the European Parliament, Saskia Bricmont (Greens/EFA), shares her views on the results of the European elections and on what's in store for the five years to come:

These Europeans elections saw the highest turnout in twenty years. How do you explain that?

One of the major issues of this election was the rise of the far-right  and Euroscepticism. But that brown wave was hit by a different type of wave, a green one, a wave of popular support for the climate and underlying issues.

The increase in turnout could also be due to the communication led by the European Parliament, which, for the first time, set up the This time I’m voting campaign. A large number of debates were organised all over Europe, some by stakeholders such as CEMR.

The institutions’ proactive and positive communication on the work it has done has made Europe more concrete and tangible in the eyes of citizens.

The representation of women in the European Parliament has reached 39%. Are you satisfied with this result?

Is it enough? I don’t think so. We need more women in politics and we need a gender balance in order for the Parliament to mirror the reality of society.

At the same time, we also need a better age balance. Today, most MEPs are men over the age of 50.

With discussions in progress regarding who will get the EU top jobs, do you think Member States will respect gender equality?

In 2014, we said: we will support a Commission with 1/3 of women. Today, we need a gender balance within the college, and why not a woman as President of the Commission.

Having a gender balance in decision-making bodies at every level can make things change. It will also make it easier for citizens to identify with the current political class.

Eurosceptic parties achieved a historically high score in several countries. How should we deal with this new reality?

Pro-European parties must work together, find unity around a common project. Without a positive project for Europe, Euroscepticism and the far right will gain new ground.

To do so, we need a new paradigm, a transition. Because the signal that was sent by voters is that we need to engage in the climate transition. Many are calling for a different kind of politics, and to put finance and economics at the service of the environment and people’s well-being.

What are your priorities to drive this transition?

In Europe, we must finance the transition at every level, and adopt climate-finance pacts. That would allow local and regional governments to access 0% loans, for instance, whether it’s via the European Investment Bank or a “climate” bank.

We should also redirect funds invested in fossil fuels towards the renewable energy sector. We have to accompany old industries and make them transition towards a new, more sustainable model.

How can we make the transition easier?

Nowadays, the budget Europe imposes upon municipalities does not always allow them to invest in the transition. Through the creation of a bank for the climate, Europe can set up a mechanism which would facilitate these investments at local and regional level.

The EU can also positively influence things with the regional development funds, by systematically integrating social and environmental criteria in all these programs.

Towns and regions must be accompanied, or at least have the possibility. There should be guides or coordinators, as there is with the Covenant of Mayors. By that, I mean the possibility of receiving support, for instance for cities that do not have the resources to employ staff to implement a programme or a European project.

The Commissioner in charge of the climate recently suggested directing 25% of the EU’s budget towards the fight against climate change. Is that enough?

Generally speaking, the European budget needs an increase. There is no way it can be decreased, or the EU would be made meaningless. The EU needs its own operational and investment budget.

25% of the budget is not enough. At the Green party, our assessment is that at least 50% of the European budget should be directed towards the ecological transition, because all policies must integrate this transition.

In future, European policies must be climate-proof and have a sustainable focus. It’s ambitious, but necessary, in order to reach the Paris climate goals and to guarantee a sustainable future for everyone.