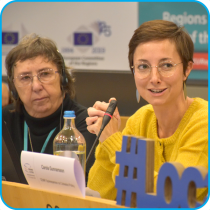 CEMR seminar on the SDGs: paving the way towards 2030 in Europe

A wind of change is blowing through Brussels. MEPs have just settled in the European district and the Commissioners-designate are expected to take up their position in the coming weeks. But with a new EU leadership come new responsibilities and new expectations.

It is against this backdrop of change that CEMR held a seminar entitled “Europe in 2030: towns and regions leaving no one behind”. The aim was to look at ways to reinvigorate Europe, based on the global 2030 agendas and the Sustainable Development Goals.

“Cohesion Policy has a huge opportunity to do real change in the run up to 2030 Agenda”, stressed Flo Clucas, CEMR spokesperson for local finances, Councillor of Cheltenham. “But it is crucial to engage those responsible of investment and ensure that this is done for the benefit of local government”, she added.

That concern was echoed by Carola Gunnarsson, CEMR spokesperson on Cohesion Policy, who stated: “The EU will only deliver on the ground if it works hand in hand with its towns and regions. The partnership principle should be a must in the future Cohesion Policy”.

Bringing the conversation back to Sustainable Development Goals, Ms Gunnarsson highlighted that “according to the world organisation United Cities and Local Governments, 65% of the targets associated with achieving the SDGs require the involvement of local and regional governments. It is frightening that their participation is so rarely considered when discussing the SDGs."

“Clearly, the SDGs feature high in von der Leyen’s political agenda for the years to come”, MEP Saskia Bricmont insisted. "They were largely mentioned by Commissioners-designates during the hearings. What struck me is that local and regional governments were almost totally absent from the discussions”.

As the seminar ended, Carol Thomas and Nathalie Noupadja from the CEMR staff, invited all participants to join the Congress of Europe’s cities, towns and regions to take place in Innsbruck, from 6 to 8 May 2020, under the motto “Local action. Global shift. Living the Sustainable Development Goals”.