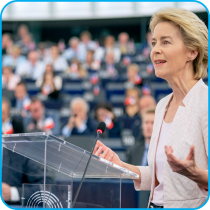 The time for backroom whispers and speculation is over. The European Commission has a new President: Ursula von der Leyen, the first woman to ever hold this position.

Laying the groundwork for a local-friendly Europe

During her opening statement as nominee, Ursula von der Leyen explicitly stated that “we need more” on cohesion funds, and spoke out in favour of subsidiarity. Her proposals also include involving regions and local communities in a European Climate Pact. This is, of course, the way to go to reach a local-friendly EU.

As President Stefano Bonaccini said, “During President Juncker’s mandate, the role of towns, cities and regions was recognised through various initiatives such as the urban agenda or the taskforce on subsidiarity. We count on President von der Leyen to pursue a collaborative approach with local and regional government, in particular via the partnership approach in the future European cohesion policy and the implementation of the Sustainable Development Goals at the local level”.

CEMR Secretary General, Frédéric Vallier, said: “We must remember that Europe should not and cannot be limited to a partnership between central governments. The EU is a union of peoples, above all else. In this sense, President von der Leyen’s proposal to ensure that citizens have their say at a Conference on the Future of Europe, to be launched in 2020, is a good step ahead.”

Also worth noting:  President von der Leyen stated that the future College of Commissioners would reflect a 50/50 gender balance. This is a groundbreaking development, and follows CEMR’s call for the political empowerment of women with the #Power2Her campaign.

From local councillor to President of the Commission

Little-known fact: President von der Leyen started her political career in local government. In 2001, she was elected local councillor of Sehnde, a town near Hanover in Lower Saxony. She held this position until 2004, as well as the position of Member of the Hanover regional assembly, where she was Chairperson of the Committee on Health and Hospitals.

As a former local councillor and regional assembly member, we count on President von der Leyen to lead a Commission that truly understands and addresses local and regional concerns.