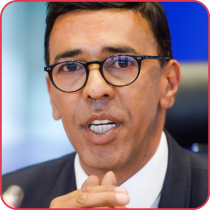 Younous Omarjee: "The mother of all battles is the battle over the budget and we will not win if the European Parliament fights alone"

What is the first fight you plan to take on?

The immediate fight concerns acting for a cohesion budget which is up to the ambitions that have been set and to the needs of all of Europe’s regions. We were already disappointed by the European Commission’s proposals, but today the budgetary scenarios being discussed by the EU Council are unacceptable for us. The European Parliament is determined to not accept the sacrifice of traditional policies, starting with cohesion policy. The position I am putting forth is also that of our assembly’s rapporteurs for the Union’s multiannual budget (MFF). The Council must really take stock of our determination.

My central priority as president is then to fight so that the future cohesion policy remains a key policy of the European Union, able to provide strong support to all of Europe’s towns and regions.

What will be the priorities of your term?

As the new chair, I also want to put new priorities at the centre of our committee’s work. First of all, to do more in the fight against poverty and notably urban poverty, which is growing everywhere across Europe and not only in the less developed regions.

Of course, cohesion policy must support the Union’s new objectives for the energy transition. This is a significant challenge for Europe’s regions, whether they are central, peripheral or ultra-peripheral. Abandoning a model which, since the industrial revolution, has been based on the development of fossil fuels is itself a revolution. The regions must be guided and supported, and I will take action so that instruments are created for this support. But I have said it before and I'll say it again: the new objectives assigned to cohesion must be accompanied by new measures, in addition to those that already exist.

Do you support the establishment of a European Green Deal?

I am waiting to learn more about the Commission’s concrete proposals for the Green Deal, after the new administration has been approved by the European Parliament. I have already been able to discuss the topic with Vice President Commissioner-Designer Frans Timmermans to emphasise the role of cities to him. And I suggested we work together to create an ambitious European programme for “greening” and planting trees  in our  towns. This is a major challenge in the fight against global warming. Millions of trees need to be planted or replanted in our cities, with all the positive effects that this would have. This is an exciting project which I am sure would be broadly supported by European citizens.

Finally, I will take initiatives for a genuinely ambitious European policy for islands. Europe is concentrated on its continental dimension, even though it is also the world’s leading maritime power. With the islands and oceans, a whole political field opens up.

Let’s go back to the budgetary issue: what is your assessment of the current negotiations on the future cohesion budget?

I still think that reason and common sense can win the day. In resuming these negotiations, the Parliament is firm in the defence of principles and will have a constructive mindset. We want to go forward according to a reasonable timeline so as to not create difficulties for fund recipients. But we will not be rushed either. And the parallel battle on the multiannual budget will not be unrelated to the trilogues on the general regulation for funds, FEDER and Interreg.

Negotiations on the general regulation have just begun, while those on FEDER and Interreg have not. We are taking on difficult work which will indeed take time. It is too early to for me to give you my assessment on all the points that will come up in the negotiation. However, the European Parliament’s position adopted in plenary is already known. It is not a secret that macroeconomic conditionalities, the partnership principle and the thematic concentration* will be the object of intense discussions.

How does Parliament plan to defend its position?

The mother of all battles is the battle over the budget. Everyone will have to be mobilised from start to finish. We will not win if we in the European Parliament fight alone. Towns and regions must make their voice heard and vigorously defend the cohesion budget. The cohesion funds don’t end up on Mars, they always end up in a town or city. Reducing cohesion spending means reducing spending and our ability to invest in all regions and municipalities.

In view of the upcoming municipal elections in France in March 2020, aren’t you afraid this issue will fall by the wayside?

This should concern all those in France who are participating in the municipal elections. I expect France’s and President Macron’s commitment to measure up to what these funds represent for our regions. The common agriculture policy’s budget and that of cohesion must be defended with the same vigour.

That is why I call on all local and regional governments to put pressure on their national government and at the highest levels of the state so that the cohesion budget is defended right up to the end of the negotiations. And I say to them that they can count on me.

Some member states have started to define the implementation of European funds even as the regulations have net yet been adopted. What risk do you see for the European Parliament’s ability to defend its position during the negotiations?

I see this and I say: at this stage, to begin this work is means taking the risk of having to do it twice. This is especially so for those who would, on top that, adopt the most restrictive interpretation possible of the partnership principle.

The European Parliament has a clear and demanding political position. It will be defended line by line. The Parliament is a colegislator and has as much weight as the Council. Make no mistake. I will be presiding all the trilogues dealing with cohesion and I can assure you that [premature implementation] will have little impact on our determination to defend the Parliament’s position. I therefore invite the member states to be careful. Codecision will be respected.

What do you think about the candidate for Commissioner for Regional Development and Reform?

It’s a good thing that Portugal, a country which is a friend of cohesion and which also has ultra-peripheral regions, made the proposal for this portfolio. Mrs Ferreira has the necessary qualities to be Commissioner for Regional Development. I believe she is personally committed to defending a strong cohesion policy which benefits all of Europe’s regions. We need a strong commissioner who can be a voice for cohesion within the College of Commissioners. We also need a commissioner who can master the bureaucracy and not be mastered it by.

Of course, during the next five years we will also need to look further and determine the broad outlines of future cohesion policy beyond 2027.

Traduire
* 'Thematic concentration' refers to the distribution of resources by policy objective.