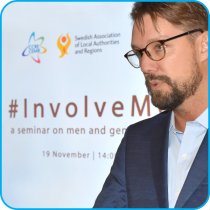 #InvolveMen: How redefining masculinity can improve the lives of both men and women

The promotion of positive forms of masculinity can improve the lives of both men and women. If gender equality is to be achieved, men and boys need to be involved as allies as well as targets of transformative initiatives.

These are some of the conclusions of CEMR’s seminar “#InvolveMen: Redefining masculinities”, held in Brussels on 19 November. The event was co-organised with CEMR’s member associations from Sweden (SALAR) and the Basque Country (EUDEL).

“Gender equality work must challenge the notions of masculinity that are a barrier to true equality,” said Emil Broberg, CEMR spokesperson on equality and regional councillor of Östergötland.

The participants emphasised that adherence to perceived ‘traditional’ gender norms can be harmful to both men and women, being associated with dangerous driving, unhealthy eating and drinking, violence and academic underachievement. “Challenging and changing toxic norms of masculinity can be a win-win: it can improve the life of men and women, and it can improve the equality and effectiveness of the services that we provide our citizens,” Broberg added.

Sandy Ruxton, an independent policy advisor and researcher, provided an overview of how masculine identities are formed and reinforced by culture and social institutions. He argued that society can move towards gender equality by promoting positive images of masculinity – such as active male parenting and fitness – or by “disinvesting” in masculinity altogether.

How regions and cities are promoting gender equality

Local and regional representatives showcased an inspiring array of projects which are promoting gender equality on the ground. These ranged from awareness-raising campaigns to mentoring and professional retraining programmes.

In Botkyrka municipality, Sweden, youth violence is being tackled at school through the Mentors in Violence Prevention (MVP) programme that educates older students as agents of change. An older student takes a younger one under their wing, discouraging negative behaviour such as sexist language and ‘honour’ based violence.

In the Basque Country, the regional government and Emakunde – the Basque Institute for Women – have been raising awareness about gender equality among men for a decade. Through various campaigns, ranging from training programmes to the distribution of ‘Backpacks for Fathers’ promoting gender-equal parenting, tens of thousands of men have been reached. The region has also organised meetings of male politicians to discuss how they can do more to promote gender equality, as shown in this video.

In the Swedish region of Värmland, the campaign “A Real Man” confronts men from various backgrounds with stereotyped statements about masculinity and shows their reactions. A website and mobile application were launched to involve as many men as possible in the conversations and a discussion-starting box was also distributed locally.

In Trondheim, Norway, a special programme is retraining unemployed men between the ages of 25-55 to become health professionals, a field that has often been stereotyped as ‘women’s work’. Since 2010, some 300 men have completed vocational training in this area.

During the event, CEMR’s Standing Committee for Equality adopted a Statement affirming the importance of involving men and boys in gender equality and challenging certain notions of masculinity.

The seminar is particularly timely given that Ursula von der Leyen’s incoming European Commission will be elaborating a new, holistic post-2019 Gender Equality Strategy. Halliki Voolma, an EU official representing the Commission at the seminar, invited CEMR to provide their input in developing the Strategy. CEMR will seek to ensure that the Strategy involves men, boys and masculinities in the work for gender equality. The Strategy should also recognise and support the work in favour of gender equality being done by municipalities and civil society organisations.

An online photo album of the event is also available.