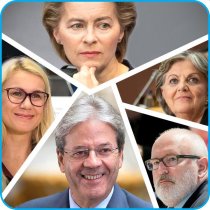 Europe is off to an ambitious start to the decade. We have taken up far-reaching objectives with the Sustainable Development Goals and the Green Deal to become the world’s first carbon-neutral continent by 2050. But what needs to happen to make these a reality in the thousands of towns and regions that make up Europe?

CEMR has a very busy agenda this week, holding several meetings with members of EU commissioners’ cabinets, namely those of von der Leyen, Timmermans, Simson, Gentiloni and Ferreira. Our goal: to make the case for how local governments and their associations can contribute to achieving Europe’s goal of sustainable and inclusive development.

“At our meetings today, we positioned local and regional governments and their associations as indispensable partners to shape future policies and win the battle for climate”, said CEMR Secretary General Frédéric Vallier. “Towns and regions’ buy-in is essential to making these a success.”

Localising the European Semester and the SDGs

CEMR met with the cabinet of Commissioner for the Economy Paolo Gentiloni, who is notably responsible for the European Semester, the process by which the EU coordinates member states’ economic policies and seeks to reduce their public spending deficits.

The figures speak for themselves: over 60% of the Commission’s recommendations in this framework have an impact on local and regional governments. Hence the Semester needs to be localised, meaning that we should be involved and consulted throughout the process.

We argued that local and regional governments’ investments in long-term and sustainable growth should not be included when calculating national deficits. For more detailed analysis, see our position paper on how to revive local public investments.

Gentiloni is also the Commission’s SDG point-man, in charge of overseeing the integration of the global goals across policy areas. Engaging towns and regions will also be critical for achieving the 2030 Agenda. At our meeting, we argued that the EU should set up an overarching SDG strategy, provide additional funding for localising the SDGs and promote dialogue with all levels of government and stakeholders. For more information, check out CEMR and PLATFORMA’s position paper on the SDGs.

CEMR looks forward to seeing how the Commission will integrate the SDGs into the Semester, thus ensuring that the process not only promotes economic stability and competitiveness, but also sustainability and social well-being.

Meeting with the cabinet of Commissioner for Cohesion and Reforms Elisa Ferreira, EU officials supported applying the Partnership Principe to the new Just Transition Fund (JTF). The Commission stated that they will encourage member states to fully involve local governments and their associations in the drafting of territorial transition plans.

How the Covenant of Mayors can support the Green Deal

CEMR and the other partners running the Covenant of Mayors presented this initiative to the cabinets of First Vice President Frans Timmermans and Commissioner Kadri Simson, responsible respectively for the Green Deal and energy. Under the Covenant, individual towns and regions commit to significant reductions of carbon emissions by increasing energy efficiency and the share of renewables.

We sought to give the new Commission a clear view of what the Covenant of Mayors is, notably as a a tool which greatly contributes to meeting the Green Deal’s objectives, and of the support towns and regions need to decarbonise.

Making the case for decentralised cooperation

Earlier in January, PLATFORMA met with the cabinet of Commissioner Jutta Urpilainen, in charge of international cooperation.  We argued for closer association of local and regional governments and their associations in the EU’s development policies. The meeting was very positive and the Commission’s outlook in this area seems to be fully in line with PLATFORMA’s work