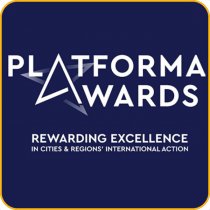 Get inspired by the PLATFORMAwards laureates!

Strengthening citizens’ participation and promoting gender equality at the local level are at the core of a partnership between 12 municipalities: 6 from the Province of Barcelona in Spain and 6 from the Region of Marrakech-Safi in Morocco. They received yesterday (8 June) the first prize at the PLATFORMAwards organised by PLATFORMA.

For the second time, PLATFORMA – the pan-European coalition of towns, regions and their associations active in decentralised cooperation – is rewarding the best practices in city-to-city and region-to-region development cooperation, with a special focus this year on the Sustainable Development Goals (SDGs).

A jury of independent elected officials and experts deemed the most outstanding project to be “Support to local and participatory democracy in Morocco” developed by the Province of Barcelona (DIBA), the districts of Ménara-Marrakech and Guéliz-Marrakech, and the municipalities of Benguérir, Had Ras Elain, Sidi Rahal and Zarktan, together with the Moroccan Institute for Local Development (Institut marocain pour le développement local – IMADEL). The 6 participating local governments from the province of Barcelona are Santa Coloma de Gramenet, Sant Boi de Llobregat, Granollers, Vilafranca del Penedès, Badalona and Sant Feliu de Llobregat.

The jury chaired by Frédéric Vallier, Secretary General of the Council of European Municipalities and Regions (CEMR) included Henk Kindt, Alderman of Roeselare (Belgium) and co-laureate with Dogbo (Benin) of the 2018 PLATFORMAwards, MEP Mónica Silvana González (European Parliament’s Committee on Development), the Mayor of Kitwe (Zambia) Christopher Kang’ombe, the Secretary General of the Congress of Local and Regional Authorities of Europe from the Council of Europe Andreas Kiefer, Member of the European Committee of the Regions Satu Haapanen (Finland) and  Peace and Security Expert at the AU-EU Youth Cooperation Hub Yasmine Ouirhrane, who was recognised in 2019 as a “Young Leader” by the European Commission.

“This is a great honour for us. With decentralised cooperation we are learning a lot. Do not think that we have only contributed to decentralised cooperation, we have also received experiences and therefore we have been able to grow in turn, […] thanks to all the work done on participatory democracy and empowerment of women” declared Pilar Díaz Romero, Deputy Councillor of International Relations of the Province of Barcelona and Mayor of Esplugues de Llobregat, at the announcement of the results. “Because in order to transform this world into a better world, everything starts at the bottom, in local governments.”

“I am deeply moved by this award. I am proud of all the work done together with the Province of Barcelona”, said Abdelfattah Ben Jakhoukh, local elected official for the Guéliz District, Marrakech. “We now need to follow up this partnership and ensure that the we build upon and make the most of the work done.”

The two entities will be rewarded with the production of a video to promote their cooperation project (worth €15,000).

The municipalities of Bornem in Belgium and Nquthu in South Africa won second place for a joint project named “Waste for Employment”.
Third place was taken by Lille in France and Oujda in Morocco for their “Decentralised Cooperation Project for Sustainable Energy”.

Ranking just after the top three, Bordeaux Métropole in France and Guanajuato State in Mexico received a “Special Prize of the Jury” for their UNEBUS project on intermodal transport systems.

Due to the COVID-19 outbreak, the PLATFORMAwards ceremony was organised online. Before the presentation of the four projects by the finalists, Carla Montesi, Director for Planet and Prosperity at the European Commission’s DG DEVCO, made a keynote speech outlining the EU perspective on decentralised cooperation. “The increasing international engagement of subnational authorities shows just how important decentralised cooperation is”, she explained. “The achievement of most of the SDGs [Sustainable Development Goals] is strongly dependent on the active involvement of local and regional authorities.”

The jury then discussed the magic ingredients for successful decentralised cooperation with the elected officials from the winning municipalities and regional governments. All agreed that trust, innovation and mutual learning were three key components that make local and regional cooperation a success.

All the laureates will be invited by PLATFORMA to participate to various EU events throughout the year and present their projects and partnerships.
The 26 applications received by PLATFORMA represented a total of 74 local and regional governments from 11 EU member states and 19 partner countries in Africa, Latin America and the European Eastern and Southern Neighbourhood.