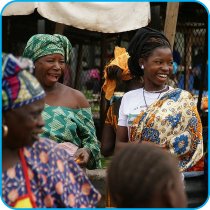 Nearly 60 local leaders from Africa and Europe gathered online on Tuesday (28 July) to discuss the creation of a “Local Authorities Charter for Gender Equality in Africa”. A diverse group of participants joined the session, including many mayors and local politicians, representatives of local and regional government associations and gender equality experts from across Africa and Europe.

The participants discussed the main findings of UCLG Africa’s online consultation on the creation of such a Charter that was conducted in the second half of 2019 and debated the possible structure and form that the Charter might take, as well as its possible content and key principles.

This was the second meeting of the Africa-Europe Support Committee and the UCLG Africa Working Group, as part of an ongoing collaboration to draft an African Charter for local gender equality. The event was organised online by CEMR/PLATFORMA, UCLG Africa, REFELA and the UCLG global organisation.

The meeting, chaired by Dao Macoura Coulibaly, Mayor of Foumbolo (Ivory Coast) and President of the Network of Local Elected Women of Africa (REFELA), provided a platform for the high level leaders and politicians from the organising associations to reiterate their strong commitment to the Charter project and its objective of making the equality and empowerment of all girls and women a reality in Africa's municipalities.

Thembi Nkadimeng, President of the South African Local Government Association (SALGA), Mayor of Polokwane and Co-President of UCLG, emphasised that “Local Authorities Charter for Gender Equality in Africa is more necessary than ever if we hope to achieve Generation Equality, a world in which women’s leadership is no longer the exception but the new norm.”

Emil Broberg, President of the CEMR Standing Committee for Equality and Regional Councillor of Östergötland (Sweden), followed up on the value of this exchange between the continents, saying that “we have the same issues to work with in European and African contexts: women’s representation in decision-making, gender-based violence and economic empowerment—which constitute the core of gender equality work”.

Léandre Nzue, Mayor of Libreville (Gabon) and President of UCLG Africa, emphasised the fact that “the COVID pandemic has heightened inequalities between men and women across the world [...] and this Charter aims to be a reference framework for local governments fighting against this.”

Emilia Saiz, Secretary General of UCLG, stressed the need to engage others in gender equality work: “It will be critical to involve other stakeholders in this process, including civil society and men. Our equality and advancement must reflect on other groups, including the most vulnerable.” UCLG is committed to supporting the Charter’s creation through collective thinking, promoting learning and exchanging global perspectives and experiences.

Frédéric Vallier, Secretary General of CEMR, added: “We’ll find solutions to the problems we face by working together across sexes, across generations, across the globe. It is through collaboration by the local, regional and international levels that innovative solutions will be created”. Referring to the inspiration that the African Charter takes from the European Charter for Equality of Women and Men in Local Life (established in 2006), Jean Pierre Elong Mbassi, Secretary General of UCLG Africa, said: “We are on a common road and need to learn from others where the obstacles are. Our roads might be different but you can help us anticipate challenges based on your experience.”

Dr Malika Ghefrane Giorgi, Special Advisor of REFELA, presented the key findings of the 2019 online consultation which received 118 responses, mostly from Africa and with many local elected representatives providing input. While many expressed their support for the Charter project and indicated that they would adhere, some were hesitant and expressed their concern that the Charter might be just another non-binding tool added to the many other gender equality commitments already taken. For this reason, it was stressed that accompanying tools and guidance on implementing the Charter must be prepared in parallel to the Charter text.

The UCLG Africa Working Group and REFELA were congratulated for their excellent work on the consultation and the resulting report. The overall structure presented was seen as a good first step that should be further debated by REFELA and the UCLG Africa Working Group, in particular to determine the scope of the chapters, whether to include the practical guidance tools as an annex or not, and how to tackle the ever important issue of women’s representation in decision-making.

At the conclusion of the meeting, UCLG Africa/REFELA announced their intention to launch the Charter in November 2021 at the Africities summit in Kisumu, Kenya. Additional discussion groups and peer exchanges will be organised in the meantime by UCLG Africa, REFELA, CEMR/PLATFORMA and UCLG in order to continue progress on the drafting of the Charter and the preparation of appropriate support tools.

Other panellists participating in the meeting included:

Translate
The UCLG Africa Working Group is a body of experts charged with drafting and preparing an African Charter for local equality between men and women.

The Africa-Europe Support Committee is an intercontinental group of elected officials and experts whose mission is to provide assistance and peer review in preparing the Charter.