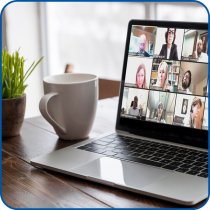 The local and regional leaders of CEMR’s Policy Committee met virtually today (Tuesday 29 September) to take stock of the situation in Europe and set the direction for our future work. The elected officials discussed several topics including the plight of migrants in Moria, scientific cooperation, local finances and new faces to represent CEMR. Here is an overview of what was discussed and decided.

Cooperation with the EU’s science and knowledge hub

The Policy Committee endorsed a Memorandum of Understanding with the Joint Research Centre (JRC), the European Union’s science and knowledge service. The document formalises already existing cooperation between CEMR and the JRC, and opens up the possibility of common work on new projects.

Researchers will be able to exchange knowledge and data with policymakers on issues relevant to local government. Possible topics include the localisation of the Sustainable Development Goals (SDGs), urban and regional development, and monitoring the results of local climate action plans. There may also be joint events between CEMR and the JRC.

Flo Clucas, councillor for Cheltenham (United Kingdom) and CEMR spokesperson for local finances, presented our analysis on the often dire state of local budgets in the wake of COVID-19. Our research* shows that local and regional governments’ expenses increased with various emergency and support services, while revenue collapsed with the contraction of economic activity.

In Germany for instance, it is estimated that municipalities’ tax income will fall by €15.6 billion in 2020, while Czech municipalities expect a 20% drop in local tax revenue in 2020 relative to last year. With the EU creating a €750 billion recovery plan, CEMR is now working to make sure that municipalities and regions are fully involved in the drafting the specific national plans.

The members of Policy Committee discussed a draft resolution on the tragic situation following the burning of the Moria migrant camp on Lesbos. The text, which should be adopted in the coming days, will call attention to the needs of vulnerable populations.

The Mayor of Sofia, Ms Yordanka Fandakova, will now serve as one of CEMR’s six Executive Presidents. What’s more, CEMR will be represented by three new spokespersons:
* Data provided by 21 of our associations in 17 countries.