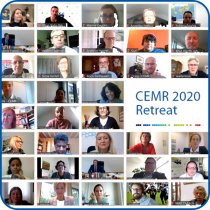 Our first experiment in hosting a retreat online has been a resounding success! With nine sessions attended by over 200 participants from 32 countries, local and regional leaders and association staff were able to come together to exchange and contribute to our common agenda for the year to come. Participation this year was around double that of last year. And all that with a minuscule carbon footprint! Here’s a roundup of the retreat’s highlights.

The retreat started with a meeting of our Policy Committee in which mayors and other elected officials had a wide-ranging discussion and took decisions on several topics. These included cooperation with the EU Joint Research Centre (JRC), local finances, the Moria migrant camp and the welcoming of new spokespersons.

The retreat’s opening political debate kick started with an exchange on how to go beyond the COVID crisis towards sustainable and resilient societies. Stefano Bonaccini, President of CEMR and of the Emilia-Romagna Region, stressed the opportunity for such a transformation. “In the next years and decades, we can make Europe the first climate-neutral continent, close the digital gap and manage the transition towards a green social market economy”, he said.

MEP Jan Olbrycht, co-rapporteur for the next long-term EU budget, updated us on the latest developments of the EU's proposed €750 billion recovery plan. The Polish MEP highlighted the many legislative hurdles that will have to be overcome for the fund to be created: 41 national and regional parliaments will have to approve and there will also need to be simultaneous consensus among national governments on the regular EU budget and enforcement of the rule of law.

Mr Olbrycht stressed just how revolutionary the recovery plan will be, being financed by pooled European debt to be reimbursed by new EU taxes. “The new funds will change the EU as it will create a stronger Union with own resources”, he said.

French MEP Aurore Lalucq shared her insights as a member of the European Parliament’s Committee on Economic and Monetary Affairs (ECON). She stressed the need to rapidly unleash the new EU fund in order to foster a sustainable recovery. “As a matter of urgency, we need to immediately unblock the funds to prepare the way for the post-COVID era”. Ms Lalucq said that unfortunately efforts to create new EU own resources by taxing aircraft fuel and plastic bags were stalling.

Professor Sebastian Siegloch of the Leibniz Centre for European Economic Research gave a presentation on the state of local finances in Germany. In 2019, municipalities already faced a €150 billion investment gap, a situation which has severely worsened with the COVID recession. He argued that aid should be focused on the most vulnerable territories, namely those which were already economically weak and/or particularly are reliant on vulnerable sectors (such as retail and tourism).

Belinda Gottardi, Mayor of Castel Maggiore (Italy), and Stéphane Troussel, President of the Council of Department of Seine-Saint-Denis (France), spoke on their governments’ efforts to make their territories more resilient and sustainable. Ms Gottardi described the numerous measures put in place by her town during the crisis, such as emergency aid, the expansion of cycling and the use public parks and squares for cultural activities. “Local government has played an absolutely vital role in tackling the crisis”, she said. “And now we are adapting our programmes to the new reality we face.”

Mr Troussel discussed the social and economic situation in Seine-Saint-Denis, marked by increased economic dynamism with the welcoming of company offices and the expansion of metro infrastructure, but also by great inequalities. He argued that the crisis had highlighted the limits of shown national administrations. “The crisis has shown local government’s reactivity, agility and capacity for innovation, often greater than those of the central government”, Mr Troussel said.

Paving the way for our future work

On Wednesday we held six breakout sessions to reconnect in a more intimate context and to orient CEMR’s work on various topics. These included public services, the social impact of COVID, cities and regions’ international role, local finances, human rights and communication.

Suggested actions included holding seminars to spread expertise among members, the formation of a permanent group of associations’ communications professionals and better structuring CEMR’s relationship with other bodies such as the OECD and the Joint Research Centre (JRC).

On the last day, the retreat wrapped up with a summary presentation and discussion of the suggested actions for 2021.