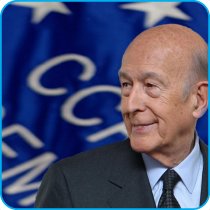 The Legacy of Valéry Giscard d’Estaing

It is with great sadness that we have learned that Valéry Giscard d’Estaing, the former President of France and President Emeritus of CEMR, has passed away at the age of 94.

“Valéry Giscard d’Estaing's presidency of the Council of European Municipalities and Regions was marked by his commitment to fight for the recognition of local and regional governments as integral parts of governance”, said Stefano Bonaccini, President of CEMR and the Region of Emilia-Romagna.

A career in service of Europe

Giscard d’Estaing’s lifelong advocacy for European unity was grounded in his direct experience of fratricidal conflict in our continent. Born in Koblenz in 1926, then-held by French occupation forces, he joined the Resistance during the Second World War and fought for the Free French forces, later being awarded the Croix de Guerre.

Upon being elected president of France in 1974, Giscard d’Estaing led a particularly pro-European government, reigniting the Franco-German engine through a warm collaboration with German Chancellor Helmut Schmidt.

His presidency saw the emergence of the European Council summits of national leaders, the first direct democratic elections to the European Parliament and the creation of the European Monetary System, which linked national currencies and thus prepared the way for the euro common currency.

After leaving office in 1981, Giscard d’Estaing continued to be a tireless advocate of European unity and the cause of local democracy. Indeed, he had been elected mayor of Chamalières – a city of 17,000 people in central France – in 1967. In later years, he combined his local and European activism while serving as president of CEMR from 1997 to 2004.

This was a particularly active period for European integration. In 2001, Giscard d’Estaing was named president of the Convention on the Future of Europe, which would draft the still-born European Constitutional Treaty, many of whose elements would enter the Lisbon Treaty, which today still in the fundamental law of the European Union.

The former French president had overseen the inclusion of many provisions in favour of local democracy in the Constitutional Treaty. “We notably owe him article 4(2) of the Lisbon Treaty protecting local self-government, which he had inserted into the draft constitution while he served as president of the Convention on the Future of Europe”, Bonaccini said.

The Constitutional Treaty recognises local and regional self-government as integral to national identities. It also extended the notion of subsidiarity to the local and regional level, with political decisions being taken as much as possible at the level closest to citizens.

It also requires the European Commission to consult local and regional governments, estimate the financial impact of EU initiatives on them and created territorial cohesion as a shared Union competence. These innovations were all included in the follow-up Lisbon Treaty.

In later life, Giscard d’Estaing continued to hold the title of President Emeritus of CEMR and to participate in our events. In a 2016 video interview in Maastricht, he called on his listeners to look to Europe’s future with confidence. He had confidence in the European project well into his final years and argued for vigorous action, telling European young people on one occasion: “take the power!”