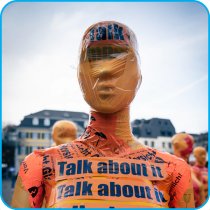 Local actions for gender equality in times of COVID

With this exceptional year of marked by a devastating pandemic coming to an end, CEMR’s Standing Committee for Equality shared examples of how municipalities are taking action to protect and promote gender equality in the face of COVID-19 and its consequences. The experiences, taken from towns in diverse situations in five European countries, showed how important it is to tackle these issues in a timely, collaborative and local manner.

The crisis’ impact is already evident in terms of women’s safety and access to health care. The long-term consequences are hard to predict but the first signs indicate that women are often those carrying the burden at the front lines of the crisis as health care workers, teachers, social workers or simply in taking on a disproportionate amount of unpaid household chores and childcare responsibilities.

When it comes to making important decisions during or after the COVID-19 pandemic, the gender perspective should stay in the focus. “It’s crucial that we, champions of local equality, make the case that tackling gender inequalities is not an additional ‘cost’ or simply a ‘box to tick’”, said Emil Broberg, Regional Councillor of Östergötland (Sweden) and CEMR Spokesperson for Gender Equality. “It’s a critical component of a successful exit from the crisis and of placing sturdy foundations for the fair and equal society we envision.”

Finland is known as a country that keeps work-life balance in focus. Sirpa Hertell, Councillor of Espoo, a city of almost 300,000 on the southern coast of Finland, outlined some of the measures taken by her municipality. These include the distribution of free school lunches to help parents better manage family life during the confinement.

The capital Helsinki meanwhile maintains a telephone helpline enabling elderly people to have access to groceries and medicine, which received 500 calls per day at the peak of the spring crisis. The services not only helped the elderly, but also gave an opportunity for people who stayed in the city without work to become helpful food deliverers. Some of these included musicians in the Helsinki Philharmonic Orchestra!

Young women and girls have been exposed to many worsening threats as a result of the pandemic. Gabriele Wenner, Head of the City of Frankfurt’s Women’s Department, presented their online advice and support services. The most commonly raised issues include sexual harassment, nightmares, self-harm and drug abuse. The advisory services are anonymous and available in Turkish, Arabic, and French as well as German. The website of Frankfurt’s House of Girls gives access to these services and has a ‘fast quit’ on every page to instantly close the site if needed.

Frankfurt has also organised online campaigns to raise about unacceptable behaviour and encourage young girls to fight back against street harassment. During the first lockdown, the department collaborated with young girls to create a campaign against catcalling and harassment of women on the city’s now-empty streets.

The power of networks

Policymakers in central-eastern Europe are also taking action. Marta Mazurek, City Councillor in Poznań, a city of over 500,000 people in west-central Poland, said her municipality is learning from other countries’ earlier experience of the pandemic. The city has launched “Safe Place”, a collaborative hostel allowing emergency placement for women victims of domestic violence, and the “Point of Intimate Care” service providing round-the-clock gynaecological services with consultation, healthcare, contraception and diagnoses.

Poznań is also proud of its local helpline for victims of domestic violence which in fact goes beyond the city limits to support people in neighbouring small towns and villages, places where victims are more likely to be discouraged from seeking help because of shame and stigma. Many people made their first call to the helpline during the crisis.

Increases in domestic violence have been reported in many countries during the confinement periods. Beyond the statistics, there are names and real people. Just last week, Sihame Haddioui, Alderwoman for Equality for the Brussels municipality of Schaerbeek, experienced the power of her network.

Fatima, a domestic violence survivor and her four children came to Haddioui searching for shelter in this cold Belgian winter. It seemed to be mission impossible, as Brussels’ hosting and emergency facilities are full. However, through a collective approach, people from different associations and civil society managed to find a solution and Fatima and her children are now safe and warm. But of course, there are many ‘Fatimas’ in towns and cities across the world. It is the role of local governments and their support networks to protect them and provide them with services.

Looking beyond the crisis

Local governments want to build on their past experience and commitments to ensure the post-COVID recovery is genuinely inclusive and properly resourced. “The European Charter for Equality should be our guiding light”, said Silvia Baraldi, City Councillor of Legnago (Italy) and Co-Chair of the CEMR Standing Committee on Equality. “This tool developed by CEMR and its members includes the core principles we must follow as local leaders to use our powers and partnerships to navigate the crisis and recovery in a gender-sensitive way.”

Some countries are already including gender-sensitive analysis and in their crisis response and recovery. Cities and municipalities are learning from each other’s practices and experiences to become more resilient and prepared for the next crisis.