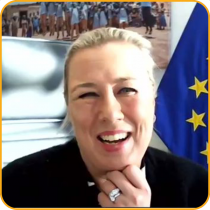 Commissioner Jutta Urpilainen: “We will support local action and actors”

“Multi-stakeholder partnerships are an essential part of our work with Civil Society Organisations (CSOs) and local authorities as key partners of EU development cooperation,” assured Jutta Urpilainen, Commissioner for international partnerships, at the Policy Forum on Development (PFD) closing event on 10 December. This was the first time the Commissioner was taking part to the PFD since she took office one year ago.

This Policy Forum on development (PFD) online meeting was the closing event of a 6-month consultation process. “What gathers us today is the idea of partnership. This is an important pilar of the 2030 Agenda,” said Frédéric Vallier, Secretary General of the Council of European Municipalities and Regions (CEMR) in the opening.

“We are all here, organisations based in the European Union and in partner countries, with a common desire to consolidate our commitments for development, notably at the local level,” the PFD co-chair added.

Frédéric Vallier expressed concerns on direct support to municipalities on development cooperation in the new Neighbourhood, Development and International Cooperation (NDICI) financial instrument: The financial support by the European Union is crucial. “The ‘geographisation’ of programmes is a good thing, in its overall design. […] But this aid should be accessible to all playors,” he said.

Committed to local and regional governments

“My X-mas wish is to conclude the negotiations on the NDICI before the end of the year,” the Commissioner answered. The Commissioner, a former City Counselor herself, showed interest and commitment to increase the frequency and the quality of the relations between the EU Delegations and local and regional governments, and to monitor that maunicapalities and regions, and their national associations are involved in all matters.

“We will support local action and actors” she also insisted. “I have been a member of a city Council for 20 years, you don’t need to convince me” she concluded.

Jean-Pierre Elong Mbassi, Secretary General, United Cities and Local Governments Africa (UCLG Africa) and Dr Greg Munro, Secretary-General of the Commonwealth Local Government Forum (CLGF) also took part to the discussion with the Commissioner, along with representatives of CSOs from Europe, Africa and Asia. Mr Mbassi and Munro intervened respectively on the role of local and regional governments and the enabling environment, and on inequalities and SDGs.