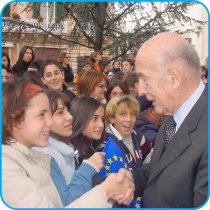 "Valéry Giscard d’Estaing's presidency of the Council of European Municipalities and Regions was marked by his commitment to fight for the recognition of local and regional governments as integral parts of governance. We owe him article 4(2) of the Lisbon Treaty protecting local self-government, which he had inserted into the draft constitution while he served as president of the Convention on the Future of Europe."