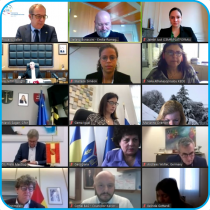 CEMR plans work for a decade of change

The local and regional leaders of the CEMR Policy Committee gathered on Thursday (28 January) to welcome new officials and prepare the organisation’s future work. CEMR’s top decision-making body adopted a series of plans for the future including the 2021-2022 work programme, our international strategy and a new multiannual strategy covering the entire decade up to 2030.

The multi-annual strategy sets forth the core principles and overall vision for CEMR’s activities up to 2030: “Empowering local and regional Europe since 1951, while promoting a more inclusive and sustainable future for all citizens and generations to come.” The strategy contributes to shared international endeavours including EU policy objectives, the Sustainable Development Goals (SDGs) and the Paris Climate Agreement.

CEMR will continue to work for the recognition and empowerment of local and regional governments, notably to contribute to common challenges such as to the post-pandemic recovery and the fight against climate change. The strategy is organised around four “Ps”: people (inclusive societies), partnership (strong local and regional governments), places (connected societies) and planet (carbon-neutral societies).

The 2021-2022 work programme outlines more specific actions to be taken within this framework. CEMR aims to be the European point of reference on local and regional issues. We will seek to become a thought leader through a modernised communications agenda that fully draws upon our members’ expertise and knowledge. CEMR itself will also take actions to become a more sustainable organisation, notably through the smart use of technological tools such as online teleconferencing.

CEMR’s already considerable work on global affairs is being formalised with a new international strategy, drafted in collaboration with members of our Committee on International Affairs, created last year. The deep interdependence between local and global politics is becoming more apparent than ever: global agendas like the SDGs and the Paris Agreement have a big impact on municipalities and regions and, conversely, cannot be achieved without their buy-in and empowerment.

The international strategy outlines several objectives including: making CEMR a key interlocutor for the EU, UN, OECD and other international organisations; strengthening our position as a principal contributor within global local government networks such as UCLG and the Global Taskforce (GTF); and boosting our leadership through international initiatives such as PLATFORMA, the Global Covernant of Mayors and the Covenant of Mayors for Sub-Saharan Africa.

CEMR has a new Vice President for Eastern Europe with Nino Rukhadze, replacing Tamar Taliashvili. Nino Rukhadze is a Member of the Tibilisi City Assembly and a professor of international law, having previously served in the Ministry of Justice of Georgia.

CEMR is pleased to welcome Councillor Gail Macgregor as our new spokesperson on employment issues. She is a Member of Dumfries and Gallow Council, representing southwest Scotland, and is the resources spokesperson for the Convention of Scottish Local Authorities’ (COSLA). Councillor Macgregor will notably participate in the activities of the EU’s social dialogue committee. CEMR will in the coming year work on the EU’s plan on social rights and proposed directive on minimum wages.

A tribute to Valéry Giscard d’Estaing

The Policy Committee mourned the passing away of the Valéry Giscard d’Estaing, the former President of France and of CEMR. Louis Giscard d’Estaing, the mayor of Chamalières and the former president’s son, highlighted his father's accomplishments in a video message, citing partnership with Germany, the creation of the first elected European Parliament and his promotion of local governments.

“All the elements then are gathered here to evoke the memory of a very Great European, who was also mayor of Chamalières, president of the French Republic and president of the Regional Council of Auvergne”, said Louis Giscard d’Estaing. Other local leaders also commemorated his achievements and CEMR’s former secretaries general shared their experiences of working with one of the great architects of European unification.