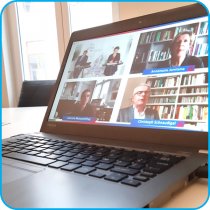 "Happy birthday CEMR!" 500 mayors and local and regional leaders from 50 countries were united in sending their best wishes to CEMR at the online celebration of our 70th anniversary. On the agenda: lively discussions, a live musical performance, studio moderation and animated videos.

You can relive the recorded event with this online video and discover the interventions and upcoming anniversary activities on Twitter with the hashtag #CEMR70. Find out more about our history and achievements with our in-depth historical article and a richly illustrated timeline of CEMR’s milestones and leaders prepared by the European University Institute.

Below you can find a summary of the insightful analyses and inspiring talks given by our speakers, featuring prestigious elected leaders and up-and-coming young activists. What might Europe look like in 2050? What pitfalls and threats are lurking? What can local government do to make that future a bright, healthy and sustainable one? Read on to find out.

“The Talk”: why Europe needs a strong local voice

During “The Talk” panel discussion, elected representatives emphasised the achievements of local governments since CEMR’s foundation in 1951 and the importance, for national and EU authorities, to engage municipalities and regions as the levels of government closest to citizens.

Annemarie Jorritsma, a Member of the Dutch Senate and a former president of CEMR, stressed that local governments should be listened to as the only level of governance which directly engages citizens on a day-to-day basis. “The local level is the only place where people meet ordinary citizens, not only those who represent one interest or another”, she said.

The Mayor of Poitier, Léonore Moncond’huy, is part of a new generation of young politicians who have awakened to the climate emergency. She affirmed CEMR’s importance for knowledge-sharing and advocacy so as to bring the European Union closer to citizens.

Moncond’huy wants practical measures to involve citizens and local governments in EU projects, particularly in the Next Generation EU post-pandemic recovery programme. “I am pushing for a more direct reationship between Europe, citizens and local representatives”, she said. “Let local governments have a more direct management of European projects, the year 2021 is a great opportunity in this respect.”

Christoph Schnaudigel, CEMR Co-President and President of Karlsruhe County, highlighted the past achievements of European local governments, notably Franco-German reconciliation at local level and the steady growth of CEMR since the 1950s. “The main achievement is that we have developed a common platform where we can also defend our common interests”, he said. “For the next 70 years it will be equally important that we find common points between the different delegations and countries in different areas.”

“Shaping the future” by facing the climate emergency

Next up two mayors of European capital cities, a young climate activist and the EU’s first ‘millennial’ commissioner spoke together about climate change and the potential of cities, young people and innovation to put an end to this grave threat. The shift to a sustainable economy will require not only changes in government and business, but indeed also in individuals’ lifestyles. But how can such social change be brought about?

The Mayor of Paris Anne Hidalgo affirmed that cities can play a leading role in tackling the multiple crises – environmental, health, economic and democratic – which our societies are struggling with. “Cities can undertake very practical policies – for example on mobility, construction and housing, or civic participation”, she said. “We are lucky in Europe to have mayors in our cities almost all of whom are engaged on climate issues.” Hidalgo observed that, despite certain polemics in the media, Parisians broadly supported changes in lifestyle such as pedestrianisation and increased cycling.

Polish youth climate activist Katarzyna Smętek argued that young people today will be a crucial driver of change as a generation which is energetic, cosmopolitan and able to mobilise the older generations through their parents and grandparents. “People should be fighting together to tackle climate change”, she said.

Fernando Medina, the Mayor of Lisbon, gave an overview of the threats in the postpandemic period. These included economic pressure to revert to an environmentally unsustainable “life as before”, huge economic and social damage, and the rise of right-wing populism. “The big challenge is to make the recovery into a time of change towards much stronger climate action, more inclusion and more democratic participation”, he said.

Medina noted that the EU’s reaction to the pandemic had been much swifter and more positive than during the financial crisis of the 2010s. Lisbon won the coveted European Green Capital award in 2020, something which Medina argued was not merely about recognition of past environmental action, but about building a future-oriented coalition for action on health and climate.

Virginijus Sinkevičius, the 30-year-old Commissioner for Environment, Oceans and Fisheries, highlighted major areas of action to create sustainable societies. He argued for shifting to a no-waste circular economy, investing in zero-pollution technologies and reversing biodiversity loss. The EU’s Climate Pact has been devised precisely to involve citizens, businesses and local governments on these issues and foster the needed collaboration across the whole society. He was optimistic on local governments’ ability to contribute. “Cities are always hubs for green innovations and new technologies”, Sinkevičius said. “They are the places where you can really see lifestyles evolving.”

“DiverCity”: Seizing the opportunity of diversity

Scholars have noted that, when mismanaged, increased diversity can coincide with a drop in social trust and capital. That makes it all the more important to get policies right so as to make the most of rising diversity and unlock everyone’s potential.

Bart Somers, the Mayor of Mechelen in Belgium, shared his experience on how he made a success of his now remarkably diverse city. Indeed, while Somers himself is a fourteenth-generation Mechelener, today half of people born there are of a foreign background.

The mayor emphasised three crucial areas of action: investing in police and social services to have a safe and clean city (otherwise residents will not trust the local government and seek a scapegoat); promoting equal opportunities and social mobility; and taking measures to socially mix people and fight segregation. “In a lot of European cities, we live in archipelagos of monocultural environments”, Somers said. “In Mechelen, we try to mix schools and sports clubs, that way people aren’t strangers to each other.”

The Mayor of Gdansk in Poland, Aleksandra Dulkiewicz, had recently commemorated the tragic assassination of her predecessor Paweł Adamowicz two years earlier. She said citizens had come together after the tragedy. Despite an intensely polarised national political climate often unfavourable to minorities, Gdansk was seeking to be a distinctly welcoming city. “Every single day we are trying to step-by-step create a city where openness and equal treatment for all are part of everyday life”, Dulkiewicz said. “I want to make Gdansk a place where every person feels at home.”

Meanwhile Noella Coursaris Musunka, an international top-model and the founder of Malaika, an NGO educating African girls, shared her experience as a European of African descent and a philanthropist. She argued for the need to improve basic infrastructure such as running water in Africa to facilitate development and to step up education.

“Imagine Europe in 2051”: the world seen through futurist glasses

Future strategists from citiesofpeople.com presented an overview of the history of government and how future thinking can enable sound long-term planning. Elected leaders responded with their own visions based on their political experience.

James Jamieson, Councillor for Central Bedfordshire and the chairman of the Local Government Association (LGA), stressed that we are seeing a long-term shift towards decentralised government. This is because citizens tend to trust local governments more and municipalities have been able to rally local communities against COVID and for sustainability. Technology and teleworking would also enable more people to live in smaller communities. “The model of the future is a connected community not a top-down central government”, Jamieson said.

Eva Maydell, a Bulgarian MEP and the President of the European Movement International, stressed the importance of future technologies and a tech-friendly approach to realising inclusion and the green transition. She was particularly optimistic about the prospect of revitalising rural areas through connectivity. “When talking about Europe in 2051, I don’t picture only the bigger cities”, Maydell said. “It is crucial to think about helping rural areas maintain their vibrancy.”

The Mayor of Thessaloniki, Konstantinos Zervas, emphasised the crucial importance of cities, representing 3% of the Earth’s surface and 72% of emissions, and innovation to tackling climate. “Climate change and innovation are the two global mega-trends”, he said. “It is essential to examine the way these two factors interact.” Thessaloniki wants to capitalise on its 24 centuries of history, attractive coastal location and 1 million inhabitants to become a regional hub not only for tourism, but also for cutting-edge universities and innovation.

Gunn Marit Helgesen, the co-president of CEMR and vice-president of the Congress of Local and Regional Authorities (CLRA) of the Council of Europe, closed off the proceedings with a positive view of local and regional governments’ future contribution to Europe. “Our political priorities offer great potential for a united, peaceful and democratic Europe”, she said.