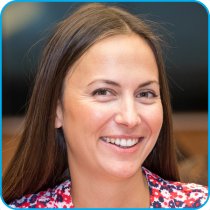 Commissioner Sinkevičius and MEP Maydell: towns can thrive in a sustainable Europe

As part of CEMR’s 70th anniversary celebrations, influential politicians and up-and-coming young leaders joined us to share their thoughts on the future of Europe and local government in a time of transformation. Among these were the European commissioner for environment, Virgijnius Sinkevičius, and Bulgarian MEP Eva Maydell. Both were decidedly optimistic on local governments’ ability to lead the environmental and digital transitions to make Europe more sustainable and cohesive.

The EU is keen to work with cities

Commissioner Sinkevičius highlighted that our societies have learned to radically change their ways of living and working as a reaction to the COVID pandemic. He stressed that cities are in an excellent position to pioneer new changes which do not simply react but practively move towards a more sustainable way of life.

“We are always keen to work with cities: cities are always hubs for green innovations, new technologies, nature-based sollutions”, Sinkevičius said. “They are the places where you can really see lifestyles evolving. This is why we set up the Green Capital award which singles out one big city every year as an ambassador for green living.”

The commissioner emphasised three major axes of action: the shift towards a no-waste circular economy, investment in zero-pollution technologies and the reversal of biodiversity loss. The European Union is taking numerous actions in these areas: a new climate law setting a binding target for the EU to become carbon-neutral by 2050; a circular economy action plan with initiatives to reduce waste at every stage of products’ life cycle; and a new European biodiversity strategy for 2030.

Sinkevičius said the public sector and businesses were increasingly recognising that reduction of pollution means savings for the whole society, not least in terms of healthcare. The EU Commission is seeking to engage everyone in the necessary changes through the European Climate Pact. “It’s an online space for citizens, businesses, civil society organisation and local governments to get together to work on threats but also opportunities”, he said. “It helps us to tune into people’s needs and it also boosts motivation for action.”

MEP Eva Maydell, who is also the President of the European Movement International, highlighted the impact of CEMR’s activities as the broadest network of local and regional governments. “Congratulations to CEMR! Your work is truly important not only for the cohesion of our continent, but also for making us more energetic as regions and delivering more for our citizens”, she said.
Maydell emphasised the importance for political leaders to be future-oriented, engaging in strategic foresight to prepare for trends 10 or 15 years from now. As part of this, she argued for a tech-friendly approach, not as an end in itself, but to promote inclusion and sustainability.

The Bulgarian MEP argued that investing in digital infrastructure can revitalise rural communities. “When talking about Europe in 2051, I don’t only picture the bigger cities,” Maydell said. “It is crucial to think about technology helping rural areas maintain their vibrancy. If we invest in connectivity infrastructures in rural areas, we can bridge the geographical digital divide, and better integrate European regions. This would enable economic growth and ease the pressure on cities with ever-growing urbanisation.”

The 2020s offer promising vistas for further collaboration between local governments and the EU. CEMR and its members will continue working hand on hand with EU institutions and stakeholders to ensure that Europe’s recovery and future involve all local governments, whether urban or rural.