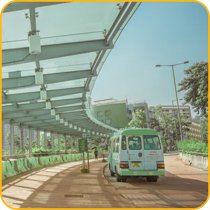 How cities are joining forces across borders to tackle climate change

Representatives of EU institutions, the United Nations and municipalities pledged for a stronger role for local and regional governments in the fight against climate change during a webinar jointly organised on 27 April by PLATFORMA and the Council of European Municipalities and Regions (CEMR). This was the first thematic webinar of the year organised by PLATFORMA, after a successful series in 2020.

“Local governments are suffering the consequences and challenges of climate change but they can also provide some of the solutions if they are empowered”, said Frédéric Vallier, CEMR Secretary General during the opening of the session.

Vallier stressed that “decentralised cooperation is an important tool to contribute to refining, designing and implementing greener policies that would support the EU climate-neutrality goals”. He added that “many actions both in the EU and in partner countries need external support through incentives, grants and additional resources.”

This was clearly supported later by Rafael Moser, Programme Specialist at the United Nations Capital Development Fund (UNCDF), who presented the LoCAL mechanism, pointing out the financial and capacity gaps of local governments on climate issues.

“There is no vaccine against climate change”, said Elena Visnar Malinovska, Head of Unit on Climate Change Adaptation at the European Commission’s DG CLIMA, welcoming the deal reached last week (21 April) on the European Climate Law. She stressed that “cities, municipalities and regions, together with citizens’ engagement, are leading the way on climate action, climate adaption and resilience.” She made clear that Europe was ready “to support more climate adaption through partnerships at different levels”, as reflected in article 8 of the Climate Law.

Turning to international cooperation, Malinovska said: “What we will try to do in Europe, we will try to mirror it in partner countries”, stressing the need to get “action driven data for climate adaption”. “Locally-led climate adaption is the way to go”, she emphasised. Data and performance indicators were also at the core of Rafael Moser’s presentation.

“We cannot succeed alone on climate change”, agreed Valentina Villoria, Programme Manager at the European Commission’s department for international partnerships (DG INTPA), who agreed that “low-income countries which have the highest risk and lower capacities, are however not prioritised.” She emphasised the importance of decentralised cooperation, stressing that local governments are more active when solutions are blocked at national level, giving the example of the Trump administration.

“Women and young people should be agents of change and not the victims of climate change”, stressed MEP Mónica Silvana González, author of the European Parliament’s own-initiative report on “Reducing the impact on vulnerable populations in developing countries”. “Climate change affects the right to housing, food and also to migration,” she added. This echoed Rafael Moser who earlier explained that LoCAL mechanism is using “participatory and gender focused approaches”.

Nino Rukhadze, PLATFORMA spokesperson, Member of Tbilisi City Assembly (Georgia), presented actions taken to tackle air pollution in the capital city where the number of cars is increasing exponentially. She explained how some road infrastructures were fundamentally redesigned “to prompt owners of private vehicles to opt for more eco-friendly modes of transportation”. “The vivid illustration of such reconstructions is Chavchavadze Avenue,” she said.

With the support of the European Bank for Reconstruction and Development (EBRD), the municipality is also “making public transportation a more attractive and comfortable means of mobility” with “brand new eco-friendly and comfortable buses.” “On top of that, the metro infrastructure is upgraded, the cable car routes are revived and bicycle lane network is developed”, added the member of the local Assembly.

Chrystele Ranchin from FAMSI stressed the importance of raising citizens’ awareness on climate change challenges and actions taken by their municipalities, focusing on the NO PLANET B project.

Constance Koukoui-Adjolohoun from Cités Unies France also stressed that French local governments are more and more concerned about the impacts of climate change on vulnerable groups and are active on adaptation and mitigation to climate change. As a network, CUF is also supporting cities’ reflection on how to refine their projects with partner countries’ local and regional governments, for instance in the fields of water, sanitation and agriculture.

Translate
Recording of the webinar
Live coverage on Twitter