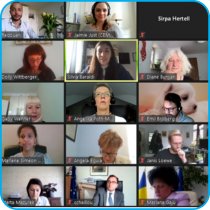 In honour of the 15th anniversary of the European Charter for Equality, CEMR is launching a months-long celebration that will last until December 2021 under the label “Charter15”. A series of events will be organised with the aim of working together to renew the Charter. To launch the festivities, a webinar took place on 12 May and gathered a riveting panel to discuss the history of the Charter and the work for gender equality in local life.

After a few opening words by Frédéric Vallier, CEMR Secretary General, and Silvia Baraldi, Chair of the CEMR Standing Committee for Equality, the webinar was the occasion to hear more about the creation of the European Charter for Equality of Women and Men in Local Life. Speakers shared fond memories of an intense collective effort as well as the challenges that its supporters had to overcome in their quest for gender equality 15 years ago.

It was also the chance to broaden horizons beyond the EU and hear about how the Charter has been used as an effective tool for gender mainstreaming in Albania and to learn about the African Charter for Local Equality which is currently under development through an international cooperation project between CEMR/PLATFORMA, UCLG Africa and UCLG.

The session’s inspiring panel was composed of Jacqueline Moustache-Belle, Director of the Gender and Youth Department of UCLG Africa; Sandra Ceciarini, Expert on Gender Equality and former director of international cooperation and citizenship at CEMR; Diane Bunyan, former member of Bristol City Council; and Dolly Wittberger, Technical support to Gender Mainstreaming in the Western Balkans.

The session concluded with final words to reassert the importance of the Charter and the fight for gender equality in the context of the pushback against equality that has been observed in Europe recently. As Emil Broberg, Vice-Chair of the CEMR Standing Committee for Equality, said: “standing together makes us stronger”.

The fun is just getting started: a series of workshops will be organised in the next few months to collectively reflect on the Charter’s strengths and identify ways in which the tool could be improved.