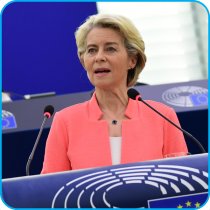 President von der Leyen: time for municipalities and regions to be fully engaged in Europe’s recovery!

This article was originally published in Agence Europe.

With the launch of the colossal NextGenEU recovery plan, the European Union hopes to accelerate the digital and green transitions. But these will only be achieved together with the players working on the ground: local and regional governments. It is high time that municipalities and regions be fully involved in the implementation and monitoring of the national recovery plans, a measure which would guarantee their success.

These last two years have shown just how vulnerable our societies are, as well as the need to face together these planetary threats: the pandemic, climate change, natural catastrophes and the risks of weakening democracy and respect for human rights.
As representatives of local and regional governments of all sizes, we could only be struck at the degree to which the territorial level has became the leading reference point for action in these times of crisis. Cities and regions have not only provided essential services while limiting the risk of further disruptions in social care, waste management, sanitation, mobility and healthcare, they have also led the way towards the return to ordinary life, with the holding of cultural events, the welcoming of tourists, the maintenance of quality public services and ensuring safe conditions for public workers.

While the crisis has confirmed the crucial role of local and regional governments, the impact on territorial finances has often been devastating. According to our monitoring of local finances, the “scissor effect” has been confirmed with a sharp drop in revenue and a spike in spending, due notably to the provision of social care, the purchase of protective equipment and support to businesses and local associations. In Germany alone, counties and municipalities are taking on such new responsibilities while facing a budget shortfall of over €10 billion.

In this crisis, the European Union quickly stepped up to the plate with an ambitious €800 billion Next Generation EU recovery programme. Now that most the national recovery and resilience plans have been approved by Brussels and support is being to trickle down, we have to think about the medium-term perspective.

How can we ensure that EU support is used wisely and effectively? For us there is no doubt: by fully involving municipalities and regions in the implementation and monitoring of the recovery plans. Local and regional governments, as the public authorities closest to the citizens, have both the know-how, knowledge and trust necessary to make the most of the recovery funds.

Unlike what was requested by the European Commission, most national governments failed to adequately involve municipalities and regions in the definition of investment priorities and the drafting of these national recovery plans.

Since then, we have obtained the requirement that national governments must report on the way municipalities and regions are involved in drafting the plans – but this does not go far enough. Assessment of local and regional involvement must be a priority in the Commission’s mid-term review of the recovery plans in 2022.

Tailor recovery spending to the needs of rural areas

The European countryside is a treasure trove of our continent’s geographical, cultural and agricultural heritage, as well as touristic assets. However, while rural areas represent 80% of the EU’s land area, many face declining populationsand the crisis risks deepening territorial disparities. According to the Commission’s public consultation on rural areas, 56% of inhabitants of rural areas felt “left behind”.

The recovery plans are an opportunity to revitalise the countryside and small and medium size cities, with targeted investments. For example, digitalisation, and in particular the rise of teleworking, can drive the renewal of many rural areas. But getting the right investments means the full participation of the municipalities and regions in question so that the plans actually reflect their needs and those of their people.  Indeed, 79% of Europeans say that there should be consideration of the specific needs of rural areas in the allocation of public spending.

Commission President Ursula von der Leyen’s European Green Deal, and in particular the recent legislative proposals on climate, energy efficiency and renewable energy, are clear signs that the EU is pushing to move forward on the green transition. But no effective results will be achieved without territories on the ground. From Nantes to Constanța and from Andalucía to Lapland, our municipalities, counties and regions are ready and willing to undertake the great environmental and digital transitions this century calls for, if they are properly empowered.

At least 37% of investment and reform spending under national recovery plans are meant to address climate change. Here too the local dimension is apparent, with municipalities and regions having a decisive role in policies such as mobility and energy efficiency. According to a Eurobarometer survey, 43% of citizens believe that local and regional governments are the right level of action for tackling climate change.

Many top EU officials, including President von der Leyen, have recognised that cities and regions must be involved in the recovery. Now is the time to translate words into actions: the European Commission must make sure local and regional governments are taken on board! This would guarantee that the EU’s recovery programme, one of the most remarkable innovations in the history of European integration, is a resounding success.

Frédéric Vallier, Secretary General of the Council of European Municipalities and Regions (CEMR)