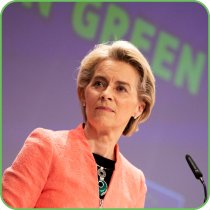 Fit for 55: What the EU's mammoth climate and energy package means for local governments

If the European Green Deal set general objectives for a more sustainable and eventually carbon-neutral Europe, the Fit for 55 package presented earlier this year outlines the legislative measures to achieve this. This analysis highlights a few of the package’s major proposals : energy efficiency, alternative fuel infrastructure and forests.

European Commission President Ursula von der Leyen put the attainment of climate neutrality by 2050 at the core of her political agenda with the adoption of the Green Deal a few months after taking office in 2019. The intermediary target of reducing emissions by at least 55% by 2030 is enshrined in the Climate Law adopted in early 2021.

Published ahead of the COP26 climate summit in Glasgow in November, the Fit for 55 package contains 13 legislative and non-legislative proposals[1]. These aim to raise the ambitions of several EU policies in the fields of climate, energy, environment, buildings, forests and transport, while ensuring a socially fair transition.

The Commission proposes to amend the Energy Efficiency Directive to require EU countries to collectively ensure an additional reduction of energy consumption of 9% by 2030 compared to the objectives set for 2020.

A key element for the public sector – including local and regional governments – is a requirement to achieve an annual energy consumption reduction of 1.7% and to renovate each year at least 3% of the total floor area of buildings owned by all levels of public administration.

CEMR is concerned about this obligation as presented. A certain level of flexibility should be applied insofar as emission reductions are proven. Many  public buildings are older or even historic buildings, and therefore a uniform 3% annual renovation target would be too onerous for local and regional governments.

Alternative fuel instracture: coordination needed between all levels of government

A revised directive will set a number of mandatory national targets for the deployment of infrastructure so road vehicles can use alternative fuels, such as electricity, hydrogen or natural gas. It is crucial that Member States engage with municipalities and regions to ensure that the measures implemented by different governance levels reinforce and leverage impact.

Within the new EU Forest Strategy, the European Commission aims to improve the quantity and quality of forests. Acting as carbon sinks, forests contribute to reducing emissions and are essential to maintaining biodiversity. The Commission is notably calling for a strict protection of remaining EU primary and ancient forests (today estimated at 3% of the EU’s territory). In addition, the EU wants 3 billion additional trees to be planted by 2030.

The strategy has been under discussion for some time with a wide range of stakeholders, including local and regional representatives. They call for sustainable forest management with a balance between three pillars: environment, social and economy.

The Fit for 55 package has a strong territorial dimension given that a wide range of actions to attenuate or mitigate climate change are taking place at local or regional level. Moreover, climate change disproportionately affects certain vulnerable territories and populations.

The CEMR Secretariat will closely follow the negotiations in the Parliament and the Council for the most relevant proposals, notably on energy efficiency, renewables, buildings and transport.
[1] The proposals include revisions and amendments to existing legislation:
New proposals:
And future proposals: