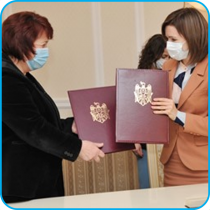 This distinction was presented by Moldovan President Maia Sandu "as a sign of high appreciation of special merits to the state, for substantial contribution to asserting interests and promoting the image of the Republic of Moldova in the world, for outstanding professional success, for civic initiative and active participation in advancing reforms".

This Prize was handed to Ms Badan on the occasion of the 30th anniversary since the proclamation of the independence of the Republic of Moldova. She has over 28 years of experience in local public administration, serves as a mayor for more than 18 years, in 5 mandates