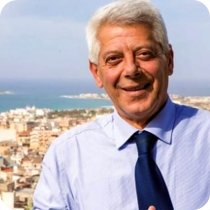 Interview with the mayor of Capaci: “I dream of an inclusive and welcoming Europe”

Migration is a global phenomenon with a strong local impact. Cities bear the burden the migration crisis by receiving newcomers – sometimes providing life-saving support – but also reap the long-term benefits of successful integration. This applies to cities and islands across Europe, in particular in southern Italy.

Ahead of International Migrants Day (18 Dec) we spoke with Pietro Puccio, the CEMR spokesperson on migration and the mayor of Capaci, a Sicilian city taking part in the IncluCities project to improve migrant integration and build more inclusive cities. He shared with us his town’s experience welcoming newcomers, as well his vision of a united Europe that is open and inclusive.

How have Capaci and the Palermo district been affected by migration in recent years? What tools can local communities and local governments use when the main responsibilities and competences are with national governments?

When the responsibilities fall to national governments, local authorities have little room for maneuver. Despite this, we can achieve a lot by mobilising all the local associations through their widespread and active volunteers. In our region for instance, an important solidarity network has been created.

Capaci and Palermo have perhaps been on the margins of immigration in recent years. The main arrival routes have been elsewhere, such as Agrigento, Lampedusa, Ragusa and Syracuse, from where immigrants have been directly relocated to other places.

However, the Port of Palermo also continues to experience significant arrivals. The volunteer associations are playing a fundamental role there in receiving immigrants. Through their work we were able to provide a meaningful response to the rising number of new arrivals.

You have often said that we should move from the emergency management of receiving immigrants to structured practices of inclusion and integration of newcomers in our societies. Looking at the EU's migration and asylum policy, and in particular in light of the recent events in Afghanistan, it appears that the EU is trying to keep the migration issue at its external borders. What do you think about this management approach?

Maintaining the migration emergency at the borders is an illusion. It’s unrealistic. There will be more and more emergencies in the world, simply dictated by the climate crisis. We pass from one emergency to another in Syria, Libya, then Afghanistan…

Europe can do it better. It doesn't need “gendarmes” at the borders, nor agreements with the illegitimate Libyan government or with Turkey’s Erdogan. If we want to eliminate the shame and the indignity of the reception camps in the Balkans and elsewhere, if we really want to provide a response that looks beyond immediate emergencies, we should build a structured common response at the European level. If Europe doesn’t do it, nobody will.

United Cities and Local Governments (UCLG) launched the debate on the Charter of Lampedusa, where local and regional governments are reshaping a notion of citizenship that should be defined around dignity, human rights, peace and collective memory, regardless of the status of people on the move. What do you think of this new form of "inclusive local citizenship" UCLG is developing with its members?

Europe is the cradle of world civilisation and must start over based on human dignity and respect for the human rights of all. But there is also a great economic advantage. Let me give you an example: in our area there is a municipality nearby, Balestrate, with hectares of land that are now planted with mangoes. Mangoes are typically a tropical fruit but due to climate change, the weather conditions in Sicily have become appropriate to grow mangoes. The new arrivals can be new consumers. Thus immigration can create new opportunities and new jobs. If Europe wants to provide a general response, it should focus on decent work, job opportunities and respect for human rights.

What is the main thing that Capaci could learn in the IncluCities project? What is the most necessary change that you'd like to start developing in your city?

Capaci is a town with an ancient welcoming culture, but in recent years this culture has been somewhat lost. Fear has taken over, the concern of having a neighbour who is a bit different. By taking part in IncluCities I hope the city will return to being as welcoming as we once were, no longer afraid of those with a different skin colour, those of a different religion or political orientation. I believe that this is a great and unique opportunity for our city. The first thing I would like to see is newcomers no longer hiding inside their homes, but walking around, playing with their children in squares, socialising in public places, also meeting with the citizens of Capaci. This is the most beautiful change I wish for this city.

What is your greatest dream as an Italian citizen and mayor of Capaci for the future of Europe? What role do you think migration should play in the Conference on the Future of Europe?

The theme of immigration is central in the global context. Just look at what's happening in South America, at the border with the United States of America or every day here in Europe. The topic must have an important, leading role in the discussion at the Conference on the Future of Europe

I dream of the Europe that our founding fathers – Altiero Spinelli, Schuman – dreamed of; a Europe that is inclusive, where everyone can have the right to citizenship and respect for their human rights. The pandemic, which is unfortunately still ongoing, has taught us one crucial thing: how much we need each other. Only if each of us gets vaccinated can we beat COVID. If there is an unvaccinated part of the community, we can’t win. We are all connected.

My dream is that we work together for a Europe that is an inclusive, tolerant, welcoming place. A federal Europe where no one is left behind, where every citizen matters and each opinion counts. The future of Europe is my dream!