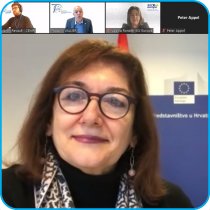 Local and EU leaders’ debate: time to strengthen European democracy from the bottom-up!

With the Conference on the Future of Europe, citizens across the continent have a unique opportunity to organise local events and make their voice heard to shape the direction of our Union. But how can we foster citizens’ participation? And what visions do we have for municipalities and regions in the future of Europe?

Last week, ahead of our Policy Committee meeting, local and regional leaders, senior EU official and representatives of civil society took part in a debate to discuss precisely these questions.

Dubravka Šuica, Vice-President of the European Commission in charge of Democracy and Demography, emphasised that European democracy must not be a top-down process. “Once a mayor, always a mayor,” she said. “As a former mayor, I know all politics is local.”

Mayors and regional leaders must make their voices heard at the Conference. The Croatian commissioner said it was impossible to know what the Conference’s outcome would be but that it was important to already look for ways to embed citizens’ participation in decision-making.

Involving ordinary citizens in European debates and decisions is not always easy however. Developments in Brussels and Strasbourg too often seems remote and abstract. That is why the French city of Rennes has invited local citizens to participate through municipal projects.

Flavie Boukhenoufa, Deputy Mayor of Rennes, presented Labo Europe, an organisation helping citizen get involved in and better understand the EU. This year the “Lab” launched a campaign to develop a European Citizens’ Initiative (ECI) for Rennes. Citizens are able to send in their ideas and participate in online debates to create the city’s proposal for a European action.

The final choice will be presented on Europe Day on 9 May. “We aim to speak not with experts but with citizens, even those who have no knowledge about the EU”, said Boukhenoufa. Get inspired by checking out this video and website on Rennes’ citizen initiative

People across Europe can provide their input to the Conference by organising local events and registering these with the official online platform. Servane Metzger, part of the Cabinet of the French Secretary of State for European Affairs, highlighted the importance of these local events in terms of engaging people and reflecting the sensibilities of different regions.

Metzger raised the possibility of maintaining the platform into the future: “The platform is an extremely powerful tool to map events. It’s really easy to see events that are nearby, that way we reach local people, not only EU specialists.”

What future for Europe?

The health of European democracy is also affected by the state of national and local democracy.  Mayor of Gdansk and CEMR Executive President Aleksandra Dulkiewicz stressed that we cannot take democracy for granted and urged protecting the next European elections from digital threats and outside interference.

Vibrant local democracy can also be a bulwark against negative developments at national level. Dulkiewicz called on the Conference to support NGOs and local and regional governments to counter rising authoritarianism. “These two pillars should be strengthened because threats to democracy, rule of law, human rights and transparency in one EU country can affect the whole community”, she said.

Jordanka Fandakova, the Mayor of Sofia and CEMR Executive President, highlighted the importance of the digital divide, with rural areas in particular often lacking connectivity. She called for making equal Internet access a priority. “Digital strategies should not only be focused on big cities, but also take into consideration the needs of small towns and communities”, she said.

No one can say what will result from the Conference. Eva Maydell, a Bulgarian MEP and President of the European Movement International (EMI), argued that pandemic showed the power of European solidarity, but also the need to strengthen our continent’s autonomy. She stressed that the EU can only maintain trust if the Conference delivers results: “Like every political project, the EU is based on a story and its ability to meet the promises it makes to its citizens.”