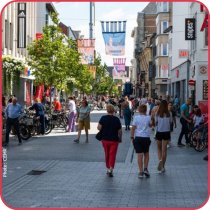 Cooperation and knowledge exchanges between European towns can play a key role in integrating newcomers, experts say, adding that their inclusion strategies can also serve as a model for larger
European cities.


“The local communities are where integration happens, through working and studying,” said Katerina Dimitrakopoulou from the Commission’s directorate-general for migration, pointing to the key role of local authorities in integrating newcomers.

Around 8.4% of the EU population are people born outside the bloc and between two and three million third-country nationals settle in the EU for work or study every year, according to the Commission.

To support European cities and regions facing new arrivals, in March 2021 the EU executive and the Committee of the Regions launched a partnership aimed at increasing capacity and fostering know-how exchanges between local communities.

“Our role is to connect people, states, regions and cities and make sure that all the good practices […] are properly disseminated,” Dimitrakopoulou said.

Knowledge exchanges are particularly important for smaller towns, which often do not have the same capacity and means to welcome migrants as large cities, according to experts.

“We have cities that already know how to live with migration,” Barbara Kuznik from the Council of European Municipalities and Regions (CEMR) told EURACTIV, adding that these can serve as a model for other EU towns managing new arrivals.

Kuznik is currently working on the IncluCities project, which allows medium-sized cities to mentor smaller towns on integration practices.

“Sharing our own experiences helps us reflect on the way we promote our services and improve them,” said Juan Carlos Hernández Navas, technical director for city projects in Fuenlabrada, which is mentoring the Greek town of Livadia on employment opportunities for newcomers.