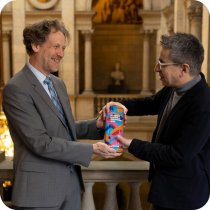 There are many awards celebrating outstanding cities. One certainly missing is the European Capital for Democracy. At the heart of the EU construction, this core value definitely deserves some stage light. That’s why in January 2023, a pan-European citizen jury designated the first ever “European Capital of Democracy”: Barcelona.

In the beginning of the year, several thousand citizen jurors from the 46 Council of Europe member states assessed a range of projects by three finalist cities, Barcelona, Braga, and Brussels. Barcelona convinced the jury with innovative projects such as Decidim, a digital citizen participation platform used by hundreds of cities around the world; and Superblock, an initiative to reclaim the city’s streets from cars.

‘Local government has always been the level of public authority closest to the people it serves,’ explains Marija Pejčinović Burić, Secretary General of the Council of Europe. ‘It is here that new ideas and democratic participation are best placed to flourish. The European Capital of Democracy not only recognises excellence but holds it up as an inspiration to others.’

From September 2023 until August 2024, Barcelona will host a Programme Year of events and activities to strengthen European democracy. Activities will be organised in cooperation with partner organisations and citizens. Visitors from all Europe are invited to participate.

‘The City of Barcelona is proud to be the first European Capital of Democracy. In a global context where hate speech and authoritarian projects are on the rise, cities are the place where we can work together with citizens to strengthen democracy.’ says Ada Colau, Mayor of Barcelona.

Do you want to participate in the next European Capital of Democracy elections?

In February 2023, the call will open for cities to apply for the next title of European Capital of Democracy. Find out how your city can apply.

If you want to participate in European Capital of Democracy as a citizen, register here.