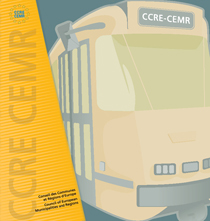 CEMR welcomes the political agreement reached by the EU's Transport Ministers in the Council, on 9 June 2006, on the proposal for a regulation on public passenger transport services. This agreement marks an important stage in the development of a legal framework for public passenger transport in Europe.
Jacques Auxiette, President of the Regional Council of the Pays de la Loire, and chair of CEMR's transport working group, expressed his satisfaction with the outcome: Finally the European Union recognises that local and regional authorities have the freedom to chose how best to organise public passenger transport, whether they want to deliver it themselves, through their own transport company, or whether they tender it out to a third party.
Looking at the Commission's initial proposal in 2000 and its revised version from 2002, the modifications of the Council prove that the Council has taken into account local and regional governments concern and respects the principle of subsidiarity and local self-government.
The text of the regulation, as adopted by the European Transport Ministers, meets almost all of CEMR's main priorities for amendments to the Commission's proposal on the public passenger transport regulation.
More importantly, the Council's text reflects most of the general principles that CEMR supports, as expressed in its policy positions on public services. We would like to encourage the European Parliament to use these principles in the debate that its members are currently leading on the provision of public services, said Angelika Poth-Mögele, CEMR's head of policy.
CEMR still considers that the Council's new definition of -internal operator' needs further clarification in order to confirm how this relates to recent decisions of the European Court of Justice. The ECJ has repeatedly ruled against the principle of local self-government and given a very restricted definition of the control that an authority must exercise over a company that it owns by a large majority and to which it assigns a service task (in-house delivery).
CEMR believes that the Council's political agreement is a step into the right direction, balancing the proper functioning of the internal market, a positive framework for effective public services, and respect for the principles of subsidiarity and local democracy.
The press release of the Council (see page 29 of the press release)
CEMR Position Paper on the Proposal for a regulation of the European Parliament and of the Council on public passenger transport services
by rail and by road